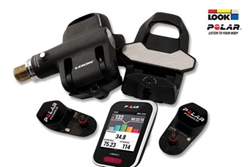 Look/Keo power pedals will be adding Bluetooth Smart to Polar WIND sometime in April or May with the Polar V650 anticipated for mid-to-late May.

Polar V650 is the new touch screen GPS bike computer that brings Polar into direct competition with Garmin according to the Heart Rate Watch Company.

"Look/Keo power pedals will be adding Bluetooth Smart to Polar WIND sometime in April or May with the Polar V650 anticipated for mid-to-late May," says Rusty Squire, President of the Heart Rate Watch Company. He adds, "The Polar V800 will also work with the new Bluetooth Smart pedals and will be out mid-April 2014 - we reported this in error last week as mid-May but it is actually sooner."

"Polar V650 has a larger screen display than its competitor Edge 510 and we have always found Polar to be more accurate on calorie and heart rate data," says Squire. He adds, "Polar has spent more time in Human Performance Labs than the other manufacturers and it shows in their data."

"We anticipate Bluetooth speed and cadence sensors will arrive on the scene this year to compliment the V650 and the Look/Keo power pedals, making it the most sophisticated and accurate cycling system available," says Squire.

"Look/Keo will come out with pedals updated with Bluetooth Smart hardware and earlier buyers can send their pedals back in to be retrofitted with the new Bluetooth Smart," says Squire. He adds, "Bluetooth Smart appears to be the new standard and many companies like PowerTap, Wahoo and others have Bluetooth Smart power products coming or on the market."

"We are accepting orders now for the Polar V650, V800 and Look/Keo pedals at the Heart Rate Watch Company website," says Squire.

"If you would like to talk to us then simply call 866-586-7129," says Squire. He adds, "We test and use the products we sell so we can give you the real scoop on how these products work."