One Million PIBBLE March Raises Awareness of Discrimination and Abuse

Thousands from all over the world spotlight Pit Bull Terrier discrimination and abuse during peaceful demonstration on Capital Lawn in Washington, D.C. 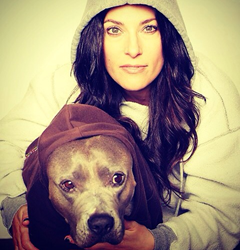 Rebecca Corry and her dog, Angel

My goal is to create safe and humane communities for humans and pets by advocating, educating and offering solutions.

Millions of pit bull terriers – commonly referred to as Pibbles – now have a voice during the first ever One Million PIBBLE March organized by comedian Rebecca Corry (Comedy Central, King of Queens, Last Comic Standing). Founder of the Stand Up for Pits Foundation, Corry will lead this historic event on the West Lawn of U.S. Capital in Washington D.C. on May 3, 2014 from 12:30 – 2:00 pm.

With the goal of raising awareness, inspiring federal funding and creating new programs, the March will discuss ways to eradicate the discrimination and abuse. Recently, President Obama spoke out about the ineffectiveness of the breed specific legislation (BSL) laws and ways to see it abolished. The reality is the dog fighting epidemic is worse than ever before, with the majority of abuse being committed by youth ages 13 to 21.

“My goal is to create safe and humane communities for humans and pets by advocating, educating and offering solutions,” said One Million PIBBLE March organizer Rebecca Corry. “This is not just an animal issue; it is a social issue that affects us all. It is proven people who commit violent acts against animals will likely -- and most often times do go on to -- commit crimes against humanity. The targeting of pit bull terriers is an obvious reflection of broken society, but one that can be fixed. The PIBBLE March provides us a national platform to be the voice of millions of voiceless victims, and we will be heard. Abuse and discrimination can no longer be tolerated."

This historic international event – inspired by Corry’s own pit bull terrier, Angel -- is attracting attendees from all over the United States as well as Canada, England and Germany to name a few. With more than 5,000 registered attendees to date and growing, Corry is spearheading a PIBBLE movement. She will also be performing during the Stand Up for Pits comedy tour at Gotham Comedy Club in New York on April 23rd and the Arlington Drafthouse in Virginia on May 4th to continue efforts for this cause.

To date, confirmed guest speakers for the One Million Pibble March include:

Additionally, many recognizable celebrities are supporters of The Stand Up For Pits Foundation, including:

"For 20 years I believed entertaining people was what I was meant to do until Angel came into my life and showed me that standing up for pits through entertainment is my true calling,” continued Corry. “She has given my life a greater sense of purpose. Angel is the inspiration for this March, Stand Up For Pits and living proof that Pit Bull Terriers are in fact, inherently good."

About The One Million PIBBLE March

The One Million PIBBLE March, produced by C3 Presents, is sponsored by The Honest Kitchen, KAE-O, The Pit Bull Princess, Pit Bulls of Instagram, Urban Suburban Apparel, Pit Bulletin Legal News Network & Radio, Pit Bulls are for Lovers, Show Your Softer Side and Stand Up for Pits Foundation. To attend the One Million Pibble March, learn more about how to create change, or donate to the Stand Up for Pits Foundation, visit standupforpits.us. The “Be Their Voice” video promoting the One Million PIBBLE March with Angel can be viewed at: http://www.youtube.com/watch?v=KO6KgvaQHpo.

About Stand Up For Pits Foundation

Stand Up For Pits Foundation was created in honor of Rebecca Corry’s pit bull terrier, Angel, who was found roaming the streets of Los Angeles as a victim of horrific abuse. Through a live, nationwide comedy show with performers such as Bill Burr, Kaley Cuoco and Whitney Cummings, the Foundation raises money to positively advocate and educate about the true nature of Pibbles. The Foundation is also organizing the first ever One Million PIBBLE March in Washington D.C. to further their educational and awareness-based platform. All funds raised up until May 3 go to the One Million PIBBLE March. Learn more at standupforpits.us.