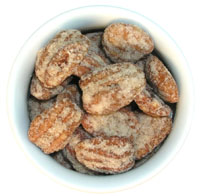 More and more people want the assurance that the food they eat is completely pure and free of anything artificial.

For the past 25 years, praline pecans have been a best seller and signature item for GNS Foods and Greatnuts.com. Although the company, which says it can coat any nut in any flavor, routinely carried ten different flavors, praline was always the most popular.

The two all-natural flavors, orange (using real oil of orange to flavor) and cinnamon (using real cinnamon to flavor) came in second and third in popularity. Though the Praline Pecan, like the other frosted nuts, is made with real butter and real sugar, the flavoring was the ingredient that kept the product from being all natural. A turning point for GNS Foods came from a request by Sam’s Club.

"Sam’s Club asked us to put together a four-part all natural flavored nut assortment for them," says Kim Peacock, GNS Foods' president. "So we reformulated our praline flavoring to be all natural." Those flavors, along with the orange and cinnamon, make up the four-part all-natural assortment. The All Natural Gourmet kettle-cooked assortment will include: praline pecans, orange almonds, cinnamon pecans, and praline almonds. The three-pound assortment will be tested this holiday season in 25 Sam’s Clubs in northern Texas and southern Oklahoma.

"The interesting thing," says Peacock, "is that there is almost no discernible difference between the artificial and the natural versions. However, the little difference that there is swings in favor of the all-natural version." As a result, GNS has replaced its non-natural praline flavor with all natural in all of its products company-wide, including its wholesale and its consumer website, greatnuts.com

Although the all-natural flavoring is more expensive, GNS Foods plans no increase in pricing for its new natural products.

GNS Foods is now setting its sights on reformulating other popular flavors including Pina Colada, Key Lime, Amaretto, Rum, and Bourbon. "All-natural is hugely popular," says Peacock. "More and more people want the assurance that the food they eat is completely pure and free of anything artificial."

About GNS Foods:
GNS Foods has been processing freshly roasted nuts, snack mixes and nut candies in its production plant in Dallas/Fort Worth, Texas for 25 years. As a national importer, roaster, processor and manufacturer, GNS now processes and sells more than four million pounds of nuts, snacks and confections to major retail chains, hotels, airlines, specialty food direct marketers and other businesses worldwide. GNS Foods is a certified woman-owned business and is proud of its record as an Equal Opportunity Employer.