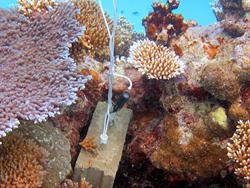 At Naitauba, Fiji, a 2,000-acre island completely encircled by a coral reef, the Naitauba Reef Initiative is working with researchers from the University of the South Pacific (USP) School of Marine Studies to learn as much as possible about all aspects of the reef. Onset’s HOBO U22 Water Temperature Pro v2 data loggers are being used as part of that work.

In 2000 and 2002, the Naitauba reef was severely damaged by coral bleaching caused by sustained exposure to elevated sea temperatures. A 2012 survey conducted by a team from USP found that the reef is recovering nicely, with new coral colonies growing on the remnants of those that died.

“However, the return of elevated sea temperatures and damage from coral bleaching remains a potential threat,” said David Forsythe, coordinator for the Naitauba Reef Initiative. “For this reason, the capability to detect potentially damaging increases in local ocean temperatures is of fundamental importance. Onset’s HOBO water temperature data loggers will give us that capability.”

Four HOBO U22 loggers were recently deployed at a depth of 10 meters at two locations on the outer slope of the reef and at depths of 2 meters and 8 meters inside the reef to provide continuous monitoring of ocean temperatures around the reef and within its lagoon. Forsythe also has future plans to deploy additional water temperature loggers within the lagoon and inner reef areas to help understand how surrounding oceanic temperatures are transferred to the lagoon and their effect on the inner reef’s growth and development.

To learn more about the Naitauba Reef Initiative, visit http://www.naitaubareef.org/.

ABOUT THE HOBO U22 WATER TEMP PRO v2
The HOBO U22 Water Temp Pro v2 data logger features 12-bit resolution and a precision sensor for a ±0.2°C accuracy over a wide temperature range. Designed with a durable streamlined case for extended deployment in fresh or salt water, the Water Temp Pro v2 is equipped with an Optic USB Interface for data offload in the field, even when the data logger is under water. Visit http://www.onsetcomp.com/products/data-loggers/u22-001 to learn more.

ABOUT ONSET
Onset is a leading supplier of data loggers. The company’s HOBO data logger and weather station products are used around the world in a broad range of applications, including building energy performance monitoring, water resources management, and ecological and agricultural research. Based on Cape Cod, Massachusetts, Onset has sold more than 2 million data loggers since the company’s founding in 1981. Visit Onset on the web at http://www.onsetcomp.com.