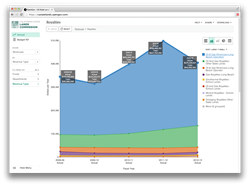 The software improves government accountability, creates transparency, and strengthens the trust and engagement between the state and its citizens. This is a significant step forward for California.

The California State Lands Commission and OpenGov.com announced today the launch of a new budget visualization website that presents the department’s entire financial picture: CAStateLands.OpenGov.com. California residents can now easily understand how the government works for them by seeing how the state administers oil and gas contracts, mineral royalties, and leasing programs. From multi-year trends to detailed budget data, visitors on the OpenGov Platform can use this innovative, web-based software to see how California manages its natural resources and generates nearly $500 million in revenue annually. This is the first use of the popular financial transparency platform by a state agency in the country.

Lieutenant Governor Gavin Newsom, in an effort to make the Commission’s finances easily accessible and understandable, initiated the partnership with OpenGov as Chairman of the California State Lands Commission. “The OpenGov Platform leverages cloud technology to unlock valuable government data, and present it in a way that is useful for government staff and meaningful to California residents,” said the Lieutenant Governor. “The software improves government accountability, creates transparency, and strengthens the trust and engagement between the state and its citizens. This is a significant step forward for California.”

The California State Lands Commission is responsible for the stewardship of the state’s tidelands, submerged lands, the beds of lakes and rivers and the natural resources contained therein. The Commission now publishes five years of expense and revenue data available at CAStateLands.opengov.com.

Dave Brown, the Chief of Administrative Services at the California State Lands Commission, added: “This site is instrumental in communicating our budget to elected officials and residents, and clearly demonstrates our stewardship of California’s resources. With OpenGov, anybody with an Internet connection can access this information at anytime.”

"The State Lands Commission is breaking new ground by becoming the first state agency in the country to present their budget data in such a clear and concise way,” says Zachary Bookman, CEO and co-founder of OpenGov. "By bringing the finances to life, California provides actionable insights for administrators and deepens its bond with local residents.”

The State Lands Commission joins more than 60 other leading cities, counties, special districts, and school systems on the OpenGov Platform. Governments from 14 states are utilizing OpenGov technology to open their financial data to the public—showing where the money goes, what services are offered, and how much those services cost. Even the City of Bell, CA, once the center of a major financial scandal, now uses the software to enhance governance, engage their citizenry and improve transparency.

The Lieutenant Governor has been at the forefront of supporting and pushing California to embrace open government. As Mayor of San Francisco, he launched the first open data platform in government, DataSF.org, after the Obama administration created Data.gov, which required all non-confidential data in city departments to be available to the public. This availability has resulted in numerous applications and companies being launched including San Francisco Crimespotting, an interactive crime map, Neighborhood Score, an app that provides an overall health and sustainability score, block-by-block for every neighborhood in the city of San Francisco and Routesy, an app that helps people find their way around the Bay Area’s transit systems.

Last year, the Lieutenant Governor brought the same idea to the state level by calling on all departments to adopt open data policies and cloud first technology. Additionally, his book Citizenville, provides an in-depth look at the benefits government and the public can receive by making data available.

The public is invited to explore the tool via the California State Lands Commission’s website, or directly at http://CAStateLands.opengov.com/.

OpenGov offers web-based software for state and local government finances. The OpenGov Platform provides instant access to the budget and visualizes current and historic revenue and expenses. Government officials and citizens use the platform to understand, analyze, and share the data. Learn more at http://opengov.com/.