Mr. Pasternak of Aeroscraft Corporation Recognized for His Support for Ukraine's Efforts 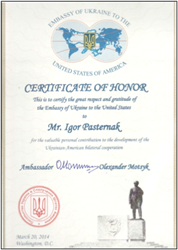 The founder and CEO of the Aeroscraft Corporation (Aeros), Mr. Igor Pasternak, was saluted by the Embassy of Ukraine in Washington, DC this week for his work to foster greater support for Ukraine’s democratic sand efforts. Pasternak was formally recognized with a prestigious “Certificate of Honor” on Friday, March 20 2014, which cites his significant contributions to bilateral cooperation.

Mr. Pasternak reacted to receipt of this honor, by stating: “I am extremely grateful for the acknowledgment, and proud to forever call myself a Ukrainian-Jewish-American. I feel blessed by the liberty and incredible opportunity America has given me these past 20 years. So, if I can play a small part in helping Americans better understand the wonderful people of Ukraine and build bridges of partnership, it is both an honor and a pleasure.”

Pasternak, who was raised and educated in Ukraine before immigrating to the United States, is a passionate promoter of Ukrainian culture and business. He has been active in both Los Angeles and Washington, D.C. to support increased bilateral ties between the two countries and has been especially active building awareness of Ukraine’s strategic economic importance among Members of Congress. Since political protests broke out across Ukraine in late 2013, Pasternak has worked to personally inform and educate Members of Congress about the geostrategic importance of Ukraine to European and US security.

In late February 2014, during the final hours of the Yanukovych Presidency, Pasternak travelled to Kyiv for diplomatic reasons in response to the outbreak of violence that had started less than 48 hours earlier, and to support peaceful transitions amid the rapid changes now taking place across Ukraine.

Less than 24-hours after bloodshed erupted on the streets of Kiev, Igor Pasternak visits Independence Square on Saturday, February 22, 2014 amid clean-up efforts. (Credit: I. Pasternak)

"I don’t believe it is right for the world to return to a divided Europe that robs countries of their independence, or their people of freedom. I’d like to encourage Members from different political leanings to carefully consider the ramifications these recent events may have on U.S. national security and nuclear non-proliferation globally. Ukraine gave up its nuclear weapons in exchange for assurances by the Russian Federation under the 1994 Budapest Memorandum on Security Assurances, in which Russia pledged to respect the boarders and sovereignty of the Ukraine and refrain from the threat or use of force against their political independence. I fear recent actions in the Crimea region could prove detrimental to convincing nations to abandon their nuclear ambitions or set a precedent that further undermines multi-national efforts to curb regional nuclear arms escalation."

Igor Pasternak was born in Kazakhstan inside the Soviet Union, and formed a childhood fascination with lighter-than-air (LTA) aircraft that has driven his life’s work and development of the Aeroscraft. He formed his first company, Aeros Ltd., in the Ukraine after graduating with a Masters in Civil Engineering from Lviv Polytechnic in Lviv, Ukraine. The Ukraine-based Aeros built and delivered advertising blimps and tethered aerostats to customers across Europe. Pasternak then immigrated to the United States in 1994 and founded Worldwide Aeros Corp. Since then, Pasternak has become one of the world’s leading experts in the design and construction of FAA certified airships, high-altitude airships, aerostats, and has pioneered the emerging class of cargo airships known as Aeroscraft.

An Aeroscraft is a new type of Rigid Variable Buoyancy Air Vehicle, designed to control lift in all stages of air or ground operations, including the ability to off-load heavy payloads without the need to re-ballast. For the first time in history, an aircraft has been designed to control and adjust buoyant and dynamic lift, creating a new paradigm for global air transportation and logistics. Poised to enhance the air transportation industry, the Aeroscraft will deliver opportunities for business and consumers globally through access to remote locations and by new VTOL cargo delivery capabilities. The key features of the Aeroscraft include a rigid structure, vertical takeoff and landing, and operational abilities at low speed, in hover, and from unprepared surfaces.

Founded 27 years ago in the U.S., the Aeroscraft Corporation (Aeros) has grown from a small aerostat production manufacturer to a leading FAA-certified airship producer and R&D firm for the aerospace industry. Aeros has achieved multiple FAA airship type certificates and operates with an FAA Production Certificate, while featuring a product line that includes advanced airships and tethered aerostats utilized in commercial and government applications throughout the world. Learn more at http://www.aeroscraft.com.