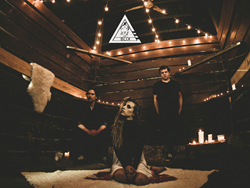 This powerful trio has been making a name for themselves in most of South Florida captivating audiences with their tunes in English and Spanish.

“The video and lyrics represent the balance between good and evil needed within ourselves, kinda like the Yin Yang" explains lead singer Ari (Areanne Briceno).

“As we create music, it was fun to come up with a thrilling story that engages you from beginning to end" adds drummer Richard Boullon.

Originally from Venezuela, Areanne Briceno, Richard Boullon and Andres Caceres form part of BLIK, an Electronic Rock band that has been standing out in a city that is mostly controlled by DJs. This powerful trio has been making a name for themselves in most of South Florida captivating audiences with their tunes in English and Spanish. BLIK has now teamed up with Octopustudio, a production firm that has worked together with other big artists like Pitbull, Vinilo Versus, and Chino y Nacho among others, to bring you the video of the single "Inside Myself".

“We wanted to create a stylish film like music video" explains Director Mike Tang. "We like to blend styles, play, create, experiment, and we take any challenge and make it tangible" he adds. The video portraits two mystical unicorns seducing each other representing dark and light. The blend between Blik’s powerful lyrics and upbeat sounds mixed with the magical scenery captured by Octopustudio will take you in an addictive mystical sensual journey. Check it out!