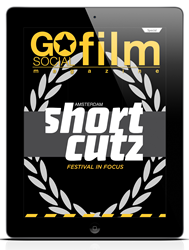 Shortcutz Amsterdam is right at the center of the short film world in Holland.

As part of its continuing Festival In Focus series, Go Social Film Magazine this month directs the spotlight towards “Shortcutz Amsterdam”, the year-long short film festival which takes place weekly each Tuesday in the heart of Amsterdam to celebrate Dutch short films and emerging national talent.

The current issue showcases three of Shortcutz Amsterdam’s January 2014 competition winners and the auteur directors who created them, “Flirt” dir. Gabriel Bauer, “Canvas” dir. Chiel Aldershoff and “Wednesdays” dir. Aaron Rookus. These talented directors share behind-the-scenes stories about the production of their films as well as personal insights on the Dutch short film industry. In addition, the magazine presents all three winning shorts for readers to view from within its digital pages on their mobile devices.

“Shortcutz Amsterdam is right at the center of the short film world in Holland. They are helping to bring recognition to a new generation of Dutch film talent.” - Jason Rogan, Artistic Director, Go Social Film Magazine

Festival founders, Portuguese natives Alexa and Joao Carlos Rodrigues, are introduced to Go Social Film readers through a personal and inspiring interview, and insights into the festival voting process is given via an entertaining interview with jury member and well known Dutch actor, Vincent Van Ommen.

"As a project aiming to promote the best up-and-coming talent, their great short films and increase the audience for Dutch film productions, Shortcutz Amsterdam is thrilled to be featured in Go Social Film. It's a great opportunity for the filmmakers we promote, since they'll be able to reach a far wider audience beyond Dutch borders." - Alexa Rodrigues, Shortcutz Amsterdam Co-Founder

About Go Social Film Magazine:
A unique combination of digital magazine and short film distribution platform, Go Social Film provides an immersive film viewing experience to its mobile audience on the iPad, iPhone, and Android mobile devices. Each month, readers are treated to a selection of short films streamed directly to their mobile devices, along with filmmaker interviews and behind the scenes material revealing how the films were made; all from within the pages of magazine.