BMX Olympians Return to DeSoto, Texas on Weekend of April 5 & 6

Over the weekend of April 4 thru 6, the USA BMX National Series returns to Metroplex BMX in DeSoto, Texas - where professional BMX racers from all over the World and our Nation’s fastest Amateur racers will be in attendance. This event - the 7th stop in the 30-race series, will draw nearly half of the 48 competitors from the 2012 London Olympic Games, along with more than 1,200 amateur competitors from over 36 states and eight countries to the city of DeSoto. 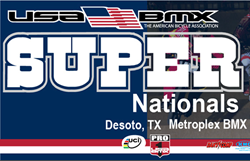 DeSoto is home to Metroplex BMX, which was the first covered facility in the USA, built exclusively for BMX racing. National BMX races have taken place in this open-air facility since 1999.

This is the 17th consecutive year that DeSoto has hosted the Super Nationals.

The annual Super nationals will return this weekend to Mteroplex BMX track in DeSoto, Texas - this weekend, April 4-6.

Among those in attendance will be the Mens Olympic Gold medalist from both 2008 & 2012 - Maris Strombergs, who hails from Latvia. He will be up against Olympic silver medalist and reigning USA BMX No.1 champion Sam Willoughby, of Australia. So far this year, Sam has won 3 of the 4 Pro series races and is determined to use DeSoto to kick off another winning streak as he did last year.

In addition, all five members of the 2012 U.S. Olympic team will be on hand for their individual chase for the USA BMX No.1 Pro title. Minnesota’s Alise Post has also been dominant so far in 2014 - winning 3 of the last 4 races, but she’ll have the Womens Gold medalist and current No.1 Woman Pro Mariana Pajon to contend with.

After winning in Reno and Tampa, current No.1 Pro champion Sam Willoughby is excited for the annual DeSoto event. “I can't wait to be back under the Metroplex roof, racing in DeSoto.” Willoughby recently tweeted - at #SW91.

Along with top Pros and Olympians, there will be over 1,200 amateur racers - ages 2 to 70-plus, competing for the weekend’s awards and national points. Saturday’s racing will kick off with the pedal-less push bike class, for 2 & Under, 3, 4 and 5 year olds. The compete on a shortened version of the 1,100 foot long track.

At the other end of the spectrum, there will be plenty of parents (and even some grandparents) competing in the larger-wheeled classes for 30, 40, 50 and 60+ year olds. This is a big part of what makes BMX racing a true Family sport - where mom and dads get to participate along with their children.

The economic impact of this event will bring millions of dollars to the DeSoto economy. This is the 17th consecutive year that DeSoto has hosted the Super Nationals.

FRIDAY: Action begins on Friday with practice throughout the afternoon and a pre-race starting at 5pm.

SATURDAY: Practice continues in the morning and National racing kicks off promptly at 11:30am with Strider (balance bike) racing for 2, 3 and 4 year olds, followed by the first rounds of Pro racing.

SUNDAY: Action begins at 8am, with the main events starting at approx 12 noon.

ABOUT BMX RACING: America’s finest athletes, along with Elite racers from Brazil, Colombia, Argentina, Latvia, Australia, Great Britain, France, Canada and more, are all expected to compete in DeSoto. Thanks in part to the global exposure that the Olympics have brought, the sport of BMX racing continues to grow in numbers and popularity with today’s youth. As the largest extreme sport in the nation, BMX racing is full of nonstop action. Up to eight riders speed down the starting hill, maneuvering over dirt obstacles and around banked turns in hopes of gaining a spot on the podium.

On average, each race is a 33 second sprint, with full contact, close-knit racing and sometimes - thrilling crashes and victories. Riders range in age from 2 to 70+ and will be racing to amass points for titles in their age classes and the highly coveted USA BMX No.1 Amateur title for boys and girls. The Olympic sport of BMX Racing is exciting to watch - and spectating is FREE!

ABOUT METROPLEX BMX: DeSoto is home to Metroplex BMX, which was the first covered facility in the USA, built exclusively for BMX racing. National BMX races have taken place in this open-air facility since 1999. Metroplex BMX services hundreds of local Dallas-area BMX participants - holding races and practice throughout the week. Practice nights are held on Mondays and Wednesdays, while race competition is held on every Friday and Saturday - for children and adults of all ages.

ABOUT USA BMX: The American Bicycle Association (ABA) was formed in 1977 and is headquartered in Gilbert, Arizona. USA BMX organizes BMX racing for boys, girls and adults, throughout the United States, Canada, and Puerto Rico. With over 70,000 active members who compete on a weekly basis at over 370 racing facilities in 49 states, the Olympic sport of BMX Racing continues to grow.