Following their great performance in the Rolex 24 At Daytona IMSA TUDOR United SportsCar Championship race, Flying Lizard Motorsports was named the first winner of the Visual Studio Team to Win Award. The announcement came following a fan vote that recognized the team's teamwork in the legendary race. 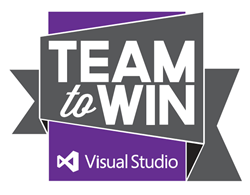 Microsoft has presented its first installment of the Visual Studio Team to Win Award to Flying Lizard Motorsports, following the team’s performance in the 2014 Rolex 24 At Daytona in January. The award is given to the team best demonstrating teamwork during each 2014 TUDOR United SportsCar Championship race. Flying Lizard Motorsports was one of four teams nominated for the award, and was declared the winner by the fan voting component of the contest. It was presented to the team during pre-race ceremonies for the 62nd annual Mobil 1 Twelve Hours of Sebring in March.

“The TUDOR United SportsCar Racing Championship stands as one of the great showcases for teamwork,” said Matt Nunn, Director, Developer Tools Product Marketing. “The ability to harness the power of individuals to achieve a common goal is at the heart of every great on-track performance. Teams of software developers need that same ability, and a great set of tools, when collaborating on new products. Visual Studio is pleased to work with IMSA to recognize the fundamentals of teamwork that we know is key to any winning effort.”

Microsoft’s involvement includes a cash prize to be awarded to the leading vote getters following each event. Four teams will be chosen by a panel of experts following each race and fans can choose the winner from those nominees. The second set of nominees, chosen from the 62nd annual Mobil 1 Twelve Hours of Sebring, reflect that spirit of teamwork against the backdrop of the always dramatic endurance classic The nominees are:

Fans can vote through 12:00 p.m. EDT Thursday, April 10, 2014, at http://on.wsj.com/1opQK6W. The winner will be announced at the famed Tequila Patrón Sports Car Showcase at Long Beach, April 10. Details on the award and on each selected team can also be found at the website.

Founded in 1975, Microsoft is the worldwide leader in software, services and solutions that help people and businesses realize their full potential.

Microsoft Visual Studio 2013 is an integrated solution that enables individuals and development teams of any size to turn their ideas into exceptional, compelling applications. It enables all stakeholders involved in software delivery to take advantage of state-of-the-art tooling to create outstanding experiences that delight end users with a simplified development solution that enables quality through all the tasks and roles involved in a software project. For more information, please visit http://www.microsoft.com/visualstudio.

IMSA is the exclusive strategic partner in North America with the Automobile Club de l'Ouest (ACO) which operates the 24 Hours of Le Mans as a part of the FIA World Endurance Championship. The partnership enables selected TUDOR United SportsCar Championship competitors to earn automatic entries into the prestigious 24 Hours of Le Mans.