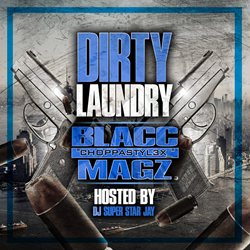 Coast 2 Coast Mixtapes announces the release of the “Dirty Laundry Vol.1 (Da Load)” mixtape by BlaccMagz. The 12-track project is currently available for download. The mixtape features appearances from F_Eaze and Jetblacc Leek.

Directly discrediting the status quo in Hip Hop today, BlaccMagz lyrical arsenal targets any rapper claiming to hold rank. “Dirty Laundry Vol.1 (Da Load)” is a testament to the life of this Hip Hop soldier with songs like “Power” which addresses the misguided hustlers who perpetuate the stereotypes of the New York street life. No stranger to controversy, on songs like "Top Of The List" and "Feel Me", BlaccMagz calls on fellow emcee F_Eaze to expose the truth about the real New York Hip Hop. With undeniable versatility BlaccMagz paints a vivid picture of the rise of a Hip Hop Tyrant in “Le Coup D'etat” then touches on love and loss in his song “Lil Thang". With lyrics so well delivered you will be continually pressing rewind to relisten to what he just said, BlaccMagz’s “Dirty Laundry Vol.1 (Da Load)” is an authentic lyrical masterpiece conveying the story of a real life Hip Hop legend in the making. Give “Dirty Laundry Vol.1 (Da Load)” a full listen and keep up with BlaccMagz on his Twitter page at @blaccmagz718.