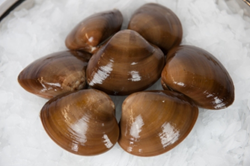 This is the first time wild clams have been permitted to cross from Mexico to the U.S. since the 1940s.

Until recently, import regulations made highly sought-after chocolate clams almost impossible to find outside of Baja. Blood clams, considered a delicacy in many parts of the world, have also proven hard to come by. Catalina Offshore Products, one of Southern California’s premier seafood purveyors and San Diego’s only exporter of sea urchin, is now among a small handful of distributors bringing both clam species to the U.S.

Named for the uniform brown color of its shell rather than any chocolate flavor, the meaty Mexican chocolate clam is one of the largest West Coast bivalves, reaching up to six inches across.

Plentiful chocolate clams (Megapitaria squalida) are harvested in and around in Mexico in all coastal lagoons from Magdalena Bay south along the Pacific side of Baja, throughout the Sea of Cortez, and along the coast of the mainland to Guatemala where they colonize in sandy bottoms in very large, dense populations.

For decades, chocolate clams and blood clams have not been allowed into to the U.S. due to strict import regulations of wild shellfish. "This is the first time wild clams have been permitted to cross from Mexico to the U.S. since the 1940s," said Catalina Offshore Products CEO Dave Rudie. "The FDA has been working closely with Mexican authorities to make sure all proper testing and procedures are being followed to ensure a product that is safe for consumption."

Blood clams present best when served raw, lightly pickled, steamed, or as the star of ceviche - particularly Peruvian-style. For chocolate clams, a simple escabeche (lightly marinated in citrus and served live or cold) works well for a half shell presentation, as does Loreto-style: baked with a layer of Monterey Jack cheese, garlic, chipotle and butter. Chefs are experimenting with modern presentations as well. Recently "Top Chef: All Stars" winner Chef Blais (Atlanta’s Flip Burger Boutique and The Spence) paired chocolate clams with a chilly foam chowder and jalapeno oil at his new San Diego restaurant, Juniper & Ivy.