Michael O'Brien, founder and principal of MOB Advocacy, a national state and local government relations firm in Fairfax, Virginia was named by the Irish Echo newspaper as one of 2014's top Irish American Business Leaders. 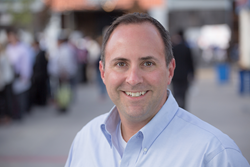 Michael O'Brien, founder and principal of MOB Advocacy, a national state and local government relations firm in Fairfax, Virginia has recognized by the Irish Echo newspaper as one of the top Irish American small business leaders for 2014. Michael and the other awardees, will accept the award at a reception at New York City's The Three Monkeys on Friday April 25 at 6:00 pm.

Michael has been very active in both the Irish-American and small business communities. He has been an officer in several Irish groups in Washington, D.C. and in Rochester, N.Y., where he grew up. He is currently helping to build a Greater Washington chapter of the Irish American Business Network. Michael also credits his first small business for helping him find his passion for advocacy and state and local government relations. Michael started a drive-thru coffee shop in Rochester and helped to rally small business owners to fight a Walmart expansion that would force him and many other small businesses to close. The grassroots effort was unsuccessful, however that experience led Michael to Washington, D.C., where he started his career in advocacy and state and local government relations.

"My Irish heritage, my entrepreneurial spirit, my passion for advocacy, it is all part of who I am. All of that goes into MOB Advocacy, into helping my clients achieve their goals every day," says Michael. "It is because of that, I could not be more honored to be recognized as one of Irish Echo's Small Business 50."

Michael O'Brien is the founder and principal of MOB Advocacy. He has more than ten years experience as a state and local lobbyist. Michael has lobbied governors, mayors, legislators, state and local agencies and regulators in more than 40 states.

MOB Advocacy's clients range from established corporations, tech start-ups, nationally recognized non-profits and advocacy groups. Our clients chose us because MOB Advocacy offers the full range of solutions of a large government relations firm with the personal service of a boutique firm. MOB Advocacy helps its clients to navigate the complex world of state and local legislative and regulatory affairs, procurement bureaucracy and appropriations processes to achieve organizational goals.