International Wildlife Adventures, providing nature and photography tours and cruises since 1994, announces the addition of trips to Namibia, Botswana, and Zimbabwe. 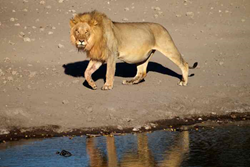 Simply put, wildlife is worth more 'on the hoof' than in the pot.

The continent of Africa has always been on the list of most popular destinations for wildlife enthusiasts. Africa is where travelers come in search of the so-called "Big Five:" African elephants, Cape buffalo, lion, tiger, and black rhinoceros.

The East African countries of Kenya and Tanzania have historically been the most popular destinations in Africa for such safaris, but in recent years other countries have come into their own, as their citizens embrace wildlife conservation as a way to increase tourism and economic growth.

Namibia is one of the countries that has managed to drastically curb poaching, and is enjoying an upsurge in visitors. International Wildlife Adventures Director Randy Green recently led a photo safari to Namibia, and was impressed by the pragmatic and effective approach of the government. "Far-sighted leaders realized that many would-be poachers and villagers looking for food simply enjoyed living in the bush and would just as soon be paid to guard the game," says Green. "Simply put, wildlife is worth more 'on the hoof' than in the pot."

Zimbabwe and Botswana, site of the famed Okavango delta are also increasingly popular destinations for wildlife enthusiasts and photographers, and have also been added as destinations to International Wildlife Adventures' collection of African tours.