Travel back nearly 400 years to the age of pirates and sea-faring men in the sprawling adventure yarn "The Sea Dogs". 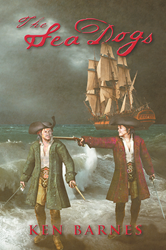 Experience the pleasures and horrors of the period, as the action moves from the London of Samuel Pepys, Drury Lane, and Tilbury, to the pirate-infested waters of the Caribbean ruled by notorious buccaneer Henry Morgan, to an uncharted island in the South Pacific. In the 17th century, England’s future depended on the sea. Merchant adventurers and shipping companies wanting to expand international trade found themselves constantly threatened by piracy.

In the first novel by Ken Barnes, three sailors resign from the King’s Navy, two to seek their fortunes on the high seas, and the third to make his mark in London society. In the ensuing years, their paths cross in various ways as they run into feisty pirates and women, as well as plenty of danger around every turn. Swordplay, romance, intrigue, betrayal, and sea battles abound in this rollicking saga that takes you around the world during a fascinating period of history.

Watch the video at: http://www.youtube.com/watch?v=LojBHLWuPFg&feature=youtu.be

THE SEA DOGS (ISBN: 978-1-62857-589-7) is now available for $21 and can be ordered through the publisher’s website:
http://sbprabooks.com/KenBarnes or at www(dot)amazon(dot)com or www(dot)barnesandnoble(dot)com.

WHOLESALERS: This book is distributed by Ingram Books and other wholesale distributors. Contact your representative with the ISBN for purchase. Wholesale purchase for retailers, universities, libraries, and other organizations is also available through the publisher; please email bookorder(at)aeg-online-store(dot)com.

About the Author: The author of three nonfiction books, Ken Barnes is an internationally successful record producer and a scriptwriter for radio and TV. He was the writer of the 2010 Emmy-nominated nonfiction special “Johnny Mercer – The Dream’s On Me.” He lives with his wife, Anne, in Benfleet, Essex, UK.