New startup headquartered in Chicago announces entry into the digital currency market to drive broader adoption of Bitcoin for everyday use. 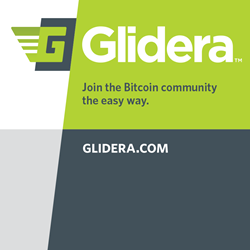 Bitcoin reminds me of the Internet’s open architecture, potential for innovation, and explosive growth. In another twenty years, I expect the majority of us will manage our finances and make payments in substantially different ways.

Glidera, a new startup headquartered in Chicago, IL, seeks to grow the Bitcoin community by enabling everyday commerce. Founded by David Ripley and Michael Xakellis, Glidera will offer secure, easy to use, transparent, and compliant services for both consumers and merchants.

Glidera enters the market as part of the next generation of digital currency companies focused on delivering fully compliant services for mainstream users. For consumers, Glidera will provide a secure, easy to use online wallet to safely buy and use Bitcoin. For businesses, Glidera will offer Bitcoin payment processing services with zero fraud risk, low costs, and seamless deployment. Glidera plans to launch its services later this year.

David brings a combined finance and technology background to Glidera. He previously advised Fortune 500 executives as a Principal at The Boston Consulting Group and before that helped build a mobile software company, Syclo (acquired by SAP), as an early member of the team. Michael brings a successful entrepreneurial track record and deep technical expertise to Glidera. He started his career in Silicon Valley and later founded Common Goal Systems, an education SaaS company headquartered in the Chicago area. Under his direction as CEO, Common Goal Systems grew to become a market leader in the education technology sector.

“I remember the ‘early days’ of the Internet when new technologies promised to change the world. Two decades later, I rarely write letters, look up numbers in the phonebook, or use an encyclopedia. Bitcoin reminds me of the Internet’s open architecture, potential for innovation, and explosive growth. In another twenty years, I expect the majority of us will manage our finances and make payments in substantially different ways,” says Ripley.

Glidera is registered as a Money Services Business with the Financial Crimes Enforcement Network (“FinCEN”) and is pursuing the appropriate state licenses. Glidera is committed to working with key members of government, including policy makers and relevant regulatory entities.

Glidera Inc. is a privately held digital currency company headquartered in Chicago, IL. The company was founded in 2013 by David Ripley and Michael Xakellis. For more information, please see http://www.glidera.com.