The Band Perry to Perform at Grand Casino Hotel and Resort, May 14

The Band Perry to perform at Grand Casino Hotel and Resort, May 14. 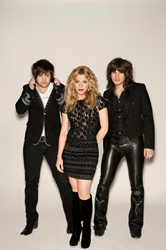 You won’t have to wait “All Your Life” to see The Band Perry when you catch them at Grand Casino Hotel and Resort on May 14.

The sibling trio was hailed as the hardest working country band of 2013. In 2014, the band performed the pre-game show at Super Bowl XLVIII and will help advise the Team Blake hopefuls during the battle rounds on season six of The Voice.

Since releasing their self-titled debut album on Republic Nashville in 2010, The Band Perry has ascended to dizzying heights. Fronted by Kimberly Perry and rounded out by her younger brothers Neil and Reid, the band has notched a string of hit singles, including the quadruple-platinum “If I Die Young,” the platinum “You Lie,” and the gold-certified Country #1 “All Your Life.” The band’s sophomore release, PIONEER, debuted at #1 on the Billboard Country Albums Chart and #2 All Genre, and produced the #1 Country smashes “Better Dig Two” and “DONE.”