“The World’s Largest Music Festival” in Milwaukee is the only stop for Usher in the U.S. this summer. 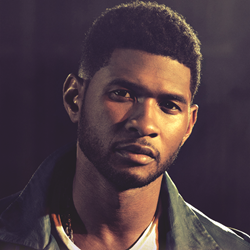 Challenging himself creatively and testing musical boundaries are characteristics that have defined Usher's career since he was first discovered twenty years ago on Star Search. Usher has been ranked by the Recording Industry Assn. of America as one of the best-selling artists in American music history, having sold over 46 million albums worldwide. He has won numerous awards including 8 Grammy Awards and was named the #1 Hot 100 artist of the 2000s decade. Billboard named him the second most successful artist of the 2000s decade, with his career-propelling 2004 album “Confessions” being ranked as the top solo album of the 2000s decade. Usher has attained nine Hot 100 #1 hits (all as a lead artist) and 18 Hot 100 top-10 singles.

This year will prove to be a big year for Usher not only in music but also film and TV. Musically, Usher is getting ready to release his much anticipated eighth studio album that is due out Fall 2014. He will also star as boxer Sugar Ray Leonard in the upcoming film “Hands of Stone,” a biopic of boxer Roberto Duran played by Edgar Ramirez that co-stars Robert De Niro due out late 2014. Usher is also currently enjoying his second season as a coach on NBC's Emmy award winning hit reality TV show "The Voice."

Tickets go on sale Saturday, April 12 at 11:00 am CST and include Summerfest admission. Tickets can be purchased at the Summerfest Box Office, Ticketmaster Ticket Centers, Walmart stores, online at Ticketmaster.com and by phone at 1.800.745.3000 (live Ticketmaster Agent) or 1.866.448.7849 (“Ticketmaster Express” automated phone line). Patrons may also utilize “ticketfast” at Ticketmaster.com to print barcoded concert tickets from home. Convenience fees may be added to all purchases.
.
PLEASE NOTE: To purchase Marcus Amphitheater tickets in person at the Summerfest Box Office on the day of the on sale, patrons must visit the temporary location at the Mid Gate on the corner of Harbor Drive and Chicago Street. Parking will be available across the street.

Summerfest fans get access to “Stay Connected” Pre-sales before tickets go on sale to the general public when they subscribe to receive Summerfest News email alerts at Summerfest.com, “Like” Summerfest on Facebook or follow Summerfest on Twitter. The Usher Pre-sale will run Friday, April 11 from 10:00 am – 10:00 pm CST or until pre-sale inventory has been exhausted.