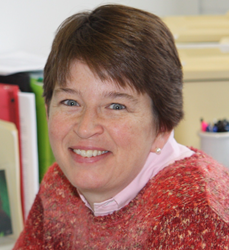 By recognizing Katie for her technical talents and proven entrepreneurial skills, we’re also inspiring the next generation of computing entrepreneurs.

The NCWIT Symons Innovator Award honors an outstanding woman who has successfully grown and funded an information technology (IT) business. The award is named in memory of Jeanette Symons, founder of Ascend Communications, Zhone Technologies, and Industrious Kid.

Since 2007, Katie has been the CTO of WiTricity Corporation. Prior to joining WiTricity, Katie has founded or co-founded high-tech companies including Wide Net Technologies, Inc. and PhotonEx Corporation. Katie holds 35 U.S. Patents and has published over 100 journal articles and conference papers. Katie has also been an Associate Editor of the Institute of Electrical and Electronics Engineers (IEEE) Photonics Technologies Letters, served on the Board of Governors for the IEEE Lasers and Electro-Optics Society, and has served on the Board of Directors for the Optical Society of America (OSA).

“As an expert in photonics, Katie Hall is a very remarkable technologist,” said Lucy Sanders, NCWIT CEO and Co-founder. “By recognizing Katie for her technical talents and proven entrepreneurial skills, we’re also inspiring the next generation of computing entrepreneurs.”

Katie will be recognized at an award celebration the evening of April 9, 2014 at the Cambridge offices of VMware, sponsored by NCWIT, VMware, and Koa Labs. The celebration is open to the public and a limited number of tickets are still available at Eventbrite.

Nominees for the NCWIT Symons Innovator Award are selected from among nearly 100 NCWIT “Entrepreneurial Heroes,” a free podcast series featuring interviews with notable women IT entrepreneurs. Past winners include Caterina Fake, Co-founder of Flickr and Hunch; Kim Polese, Co-founder of Marimba and original Product Manager of Java at Sun Microsystems; and Anousheh Ansari, Co-founder of Prodea Systems and Telecom Technologies, Inc. as well as the first private female astronaut.

About NCWIT
The National Center for Women & Information Technology (NCWIT) is a non-profit community of more than 500 universities, companies, non-profits, and government organizations nationwide working to increase women’s participation in computing and technology. NCWIT helps organizations more effectively recruit, retain, and advance girls and women in K-12 through college education, and from academic to corporate and startup careers. Find out more at http://www.ncwit.org.

About WiTricity
WiTricity is the industry leader in wireless electricity delivered over distance, and holds the foundational patents for highly resonant wireless power transfer. The company was founded in 2007 to commercialize an exciting new technology for wireless electricity invented by world renowned physicists from the Massachusetts Institute of Technology (MIT). With a growing list of global clients in industries including consumer electronics, automotive, medical devices and defense, WiTricity has emerged as the leader for IP and expertise in highly resonant wireless power transfer. For more information, visit http://www.witricity.com. Follow WiTricity on Facebook, Twitter, LinkedIn and YouTube.