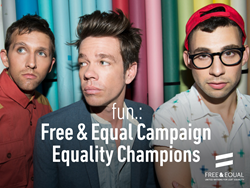 The members of the band are the latest artists to pledge their support for Free & Equal.

“We as musicians stand with the LGBT community in any way we possibly can,” said fun. member Jack Antonoff. “Together, we have the ability to make the world a freer and more equal place."

fun., comprised of Nate Ruess, Jack Antonoff, and Andrew Dost, earned two Grammy wins for their 2012 album Some Nights, including Best New Artist and Song of the Year for the 5x-RIAA platinum “We Are Young.” Bolstered by the massive global success of “We Are Young,” as well as the 4x platinum title track, “Some Nights,” and 2x platinum song “Carry On,” "Some Nights" debuted at #3 on the Billboard 200 and has since been certified platinum. The band, known for its captivating live shows, continues to perform to sold-out crowds around the world.

“We as musicians stand with the LGBT community in any way we possibly can,” said fun. member Jack Antonoff. “Together, we have the ability to make the world a freer and more equal place.”

Commenting on the announcement, Charles Radcliffe of the UN human rights office said: “fun. is made up of three incredibly talented musicians who are also great advocates for equality and human rights. Their work with the Ally Coalition is making an important difference in the fight against homophobia and transphobia, and we’re thrilled to partner with them and have their support for the UN’s Free & Equal campaign.”

Free & Equal aims to raise awareness of homophobic and transphobic violence and discrimination, and encourage greater respect for the rights of LGBT people everywhere. The campaign was launched by United Nations High Commissioner for Human Rights Navi Pillay in Cape Town, South Africa on 27 July 2013.

Free & Equal is an initiative of the Office of the UN High Commissioner for Human Rights (OHCHR) implemented in partnership with the Purpose Foundation – a leader in building global, social media-driven campaigns on human rights-related issues.