Kona's Hawaiian island style IPA is expanding into 39 states on the mainland, and will be available in bottles and draught beginning April 2014. 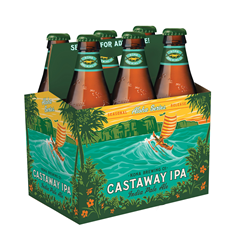 Craft beer lovers will appreciate how distinctive Castaway is from many current IPA offerings.The citrus, tropical and mango influences combine with what you’d expect from a typical IPA to create a drinking experience that takes you back to the islands.

Kona Brewing Company (NASDAQ: BREW) has announced that Castaway IPA, an island favorite for the past 14 years, will finally be coming ashore to the U.S. mainland beginning April 14, 2014. The Hawaiian-style IPA was born on the islands and will now be available in 12oz bottles and on draught in major Kona markets across the U.S., all of which are listed on the company’s online Beer Locator.

Said Kona Brewmaster Billy Smith: “IPAs are one of the fastest-growing segments in today’s craft beer industry, and we think mainland craft beer lovers will appreciate how distinctive Castaway is from many current IPA offerings. The citrus, tropical and mango influences combine with what you’d expect from a typical IPA to create a drinking experience that takes you back to the islands, where Castaway came from.”

About Kona Brewing
Kona Brewing Company was started in the spring of 1994 by father and son team Cameron Healy and Spoon Khalsa, who had a dream to create fresh, local island brews made with spirit, passion and quality. Best known for Longboard Island Lager and Big Wave Golden Ale, Kona Brewing is a Hawaii-born and Hawaii-based craft brewery that prides itself on brewing the freshest beer of exceptional quality, closest to market. This helps to minimize its carbon footprint by reducing shipping of raw materials, finished beer and wasteful packaging materials. The brewery is Hawaii’s first and largest craft brewer, headquartered where it began, in Kailua-Kona on Hawaii’s Big Island. For more information call 808-334-BREW or KonaBrewingCo.com.

About Craft Brew Alliance
CBA is an independent, publicly traded craft brewing company (NASDAQ: BREW) that was formed through the merger of leading Pacific Northwest craft brewers – Widmer Brothers Brewing and Redhook Ale Brewery – in 2008. With an eye toward preserving and growing one-of-a-kind craft beers and brands, CBA welcomed Kona Brewing Company in 2010, and then launched Omission beer in 2012 and Square Mile Cider Company in 2013. For more information, visit: craftbrew.com.