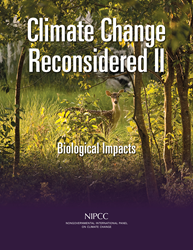 The Nongovernmental International Panel on Climate Change (NIPCC) today released Climate Change Reconsidered II: Biological Impacts at a press conference at the National Press Club in Washington, DC. The 1,062-page report, published by The Heartland Institute, contains thousands of citations to peer-reviewed scientific literature — and concludes rising temperatures and atmospheric CO2 levels are causing “no net harm to the global environment or to human health and often finds the opposite: net benefits to plants, including important food crops, and to animals and human health.”

Click here to read the full report in digital form (PDF). An 18-page Summary for Policymakers is available here. Individual chapters of the full report can be downloaded at the Climate Change Reconsidered Web site. (Look at middle of page and scroll down.)

The following statements about today’s release may be used for attribution.

"Although the IPCC claims to be unbiased and to have based its assessment reports on the best available science, that is obviously not the case. Whether the subject is the effects of warming and rising CO2 on plants, animals, or humans, the latest UN report invariably highlights the studies and models that paint global warming in the darkest possible hue, ignoring or downplaying those that don’t."

"It is most fortunate, therefore, that the NIPCC report provides tangible evidence that the CO2-induced global warming and ocean acidification debate remains unsettled on multiple levels. There are literally thousands of peer-reviewed scientific journal articles that do not support a catastrophic, or even problematic, view of atmospheric CO2 enrichment. You can learn about them in Climate Change Reconsidered II: Biological Impacts."

“This new report from NIPCC makes it clear that there is no scientific consensus on the human role in climate change. It further makes it clear that future warming is likely to produce more benefits than costs. Global warming is not a crisis. It's time to start repealing unnecessary and inexpensive policies that were adopted at the height of the global warming scare.”

To schedule interviews with authors, editors, and reviewers of the latest NIPCC report, please contact Heartland Institute Director of Communications Jim Lakely at jlakely(at)heartland(dot)org or 312-731-9364 (cell).

Among the findings in Climate Change Reconsidered II: Biological Impacts:

Previous volumes in the Climate Change Reconsidered series were published in 2008, 2009, 2011, and 2013. Those volumes are widely recognized as the most comprehensive and authoritative critiques of the reports of the United Nations’ Intergovernmental Panel on Climate Change (IPCC). In June 2013, a division of the Chinese Academy of Sciences published a Chinese translation and condensed edition of the 2009 and 2011 volumes.

These reports have been endorsed by leading scientists from around the world, been cited in peer-reviewed journals, and are credited with changing the global debate over climate change. No corporate or government funding was solicited or received to support production of these reports or NIPCC.