New release enables IT organizations to easily create and manage large numbers of Microsoft Windows® desktops in the cloud. 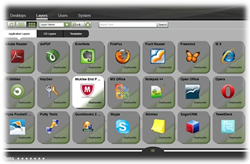 With Unidesk and VMware, we’ve found the recipe for VDI that’s straightforward and easy to manage. As more of our 6,000 desktops become virtualized, operations are becoming more streamlined and we’re seeing the cost benefit we expected.

“Our dream was that virtual desktops would be easier to operate than physical PCs, but in the past we found we were just trading off one set of cost and complexity for another,” said Jon Walton, Chief Information Officer, County of San Mateo, California. “With Unidesk and VMware, we’ve found the recipe for VDI that’s straightforward and easy to manage. As more of our 6,000 desktops become virtualized, operations are becoming more streamlined and we’re seeing the cost benefit we expected.”

Unidesk is transforming the management of Windows desktops in the cloud with its innovative desktop layering technology. The ability to virtualize any application in minutes, manage a single Windows image for all desktops, and offer a no-compromise, fully persistent user experience with minimal storage is giving organizations the confidence to deploy virtual desktops at greater scale. Unidesk 2.6 includes optimizations that significantly increase the speed of managing thousands of desktops and hundreds of layers. Rebuilding desktops, adding and removing layers, applying patches, filtering views, and searching large Active Directory and LDAP structures are now up to five times faster.

Unidesk 2.6 will offer enhanced support for View Persona in VMware Horizon 6 to allow for granular control over user-specific data and desktop settings. Customers who do not want to sustain all user customizations with Unidesk’s storage-efficient persistent desktops can now provision non-persistent desktops with Unidesk and use View Persona to retain profile changes. User-specific data and desktop settings, application data and settings, and Windows registry entries configured by user applications are all preserved. View Persona can also share user profiles across standalone systems to provide a consistent user experience for both Unidesk-provisioned virtual desktops and physical PCs.

Unidesk and VMware ThinApp together provide comprehensive delivery of Windows applications. Unidesk makes it easy to virtualize applications as independent layers so they can be assigned to virtual desktops and updated without ever having to be physically installed. Using patented file system and registry virtualization technology, Unidesk enables layered applications to cross-communicate and interoperate with each other and with Windows as if they were natively installed. Some applications, however, must be isolated to run correctly in VDI environments. VMware ThinApp eliminates application conflicts by isolating applications from each other and the underlying OS into a single executable file. These ThinApp files can easily be packaged as Unidesk application layers for automated deployment to any number of virtual desktops. The other lifecycle management benefits of Unidesk layered application delivery also apply to ThinApp packages, including revocation, patching, versioning, rollback, auditing, reporting, and single instance storage.

“Unidesk layering technology will bring management simplicity to VMware Horizon 6 deployments," said Courtney Burry, director, Marketing, End-User Computing, VMware. "Working with Unidesk, we’re better able to extend the power of virtualization from the datacenter to client devices. The new points of interoperability between Unidesk and VMware Horizon 6 will enable us to expand the best-in-class services and solutions we offer to our customers.”

“With this new release of Unidesk, we continue to set the standard for layered image and application management for desktops in the cloud,” said Tom Rose, Unidesk Chief Marketing Officer. “Windows resources need to be accessible through any device and managed with greater efficiency. Our enhanced support for VMware Horizon 6 will make Unidesk and VMware Horizon an easy and powerful one-two punch for simple, low-cost desktop virtualization.”