NDIA’s prestigious 2014 Eisenhower Award was presented on April 11, 2014, at a black-tie event at the Ritz-Carlton Tysons Corner in McLean, VA, to award-winning actor/humanitarian Gary Sinise (Forrest Gump, CSI: New York) for his continued support of America’s service men and women. 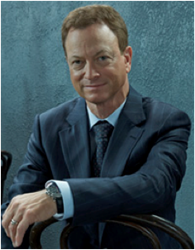 With his unparalleled sustained leadership, Mr. Gary Sinise, Academy Award-nominated actor, has set the gold standard of citizenship through remarkable contributions to the morale and welfare of our deployed troops, wounded warriors, and their families.

The National Defense Industrial Association (NDIA) is pleased to announce it presented the prestigious 2014 Dwight D. Eisenhower Award to actor/humanitarian Gary Sinise for his continued support of America’s service men and women, on April 11, 2014, at the Ritz-Carlton Tysons Corner in McLean, Virginia.

Mr. Sinise’s dedication over the years to our nation’s active duty defenders, veterans and first responders is well known and widely recognized. For over three decades, he has been a vocal and tireless advocate for those who protect our freedom and serve our country. He is best known for his roles as Lt. Dan in the blockbuster movie Forrest Gump and as Detective Mac Taylor on the hit CBS television show CSI: New York.

Mr. Sinise was presented with the Eisenhower Award accompanied by this citation:

With his unparalleled sustained leadership, Mr. Gary Sinise, Academy Award-nominated actor, has set the gold standard of citizenship through remarkable contributions to the morale and welfare of our deployed troops, wounded warriors, and their families. His dedication and accomplishments evoke the memory of another world-renowned star, the late comedian Bob Hope, who tirelessly supported generations of deployed American forces. Mr. Sinise not only entertains our deployed warfighters and keeps the home front aware of their service and sacrifice; he has also put in place a major foundation to ensure this support endures.

On a USO tour to Afghanistan and Iraq in 2003, Mr. Sinise was instantly recognized by deployed troops for one of his most iconic roles, Lt. Dan Taylor in the unforgettable film Forrest Gump. Warfighters identified strongly with Lt. Dan, a wounded Vietnam veteran whose commitment to service and willingness to make the ultimate sacrifice for his country reflected their own patriotic commitment. Mr. Sinise’s life embodies that commitment to service and was a visual reminder of Lt. Dan’s triumph over adversity and the “never say die” attitude of our American warfighters.

Mr. Sinise’s love of the troops inspired him to found the Lt. Dan Band, a 12-member rock group that covers popular music for troops in the United States and overseas. Since its founding, the Lt. Dan Band has entertained more than half a million service members and their families, lifting spirits and improving warfighter morale wherever they perform.

In 2011, to sustain the troop support network he had begun, Mr. Sinise created the Gary Sinise Foundation to raise money for programs to help service members and their families cope with the physical and psychological strains of war. The Foundation’s Restoring Independence and Support Empowerment, or R.I.S.E., program builds custom “smart” homes for severely wounded warriors. By the end of 2014, Mr. Sinise’s Foundation plans to have completed or begun construction on at least 25 homes nationwide, providing multiple amputees access to state-of-the-art technology through mobile devices.

As a spokesman for both the American Veterans Disabled for Life Memorial Foundation and Disabled American Veterans, Mr. Sinise is a powerful voice for this generation of disabled troops and their loved ones, raising awareness among the public and thanking these heroes for the sacrifices they made for us.

While maintaining his extraordinary acting career, Mr. Sinise has dedicated his life to making sure veterans returning from combat have the care and support they require and that a grateful nation never forgets their sacrifices.

Mr. Sinise’s extraordinary devotion to our men and women in uniform, his remarkable leadership in charitable service, and his unrelenting sacrifices on behalf of our troops, veterans, and their families, are in the highest tradition of American citizenship and patriotism. For his selfless support and dedication to the men and women who have served their country through more than a decade of war, the National Defense Industrial Association proudly presents its highest award, the 2014 Eisenhower Award, to Gary Sinise.

Among the criteria awardees meet are: U.S. citizenship and leadership; support of the military services and other security-related agencies, and active support of the defense industrial base and its programs.

The National Defense Industrial Association (NDIA) is America’s leading Defense Industry association promoting national security. NDIA provides a legal and ethical forum for the exchange of information between Industry and Government on National Security issues. NDIA members foster the development of the most innovative and superior equipment, training and support for warfighters and first responders through our divisions, local chapters, affiliated associations and events.