In this blues guitar lesson sample video, now available on YouTube.com, Jon MacLennan teaches how to play a cool riff from the song “Hideaway” by Freddie King. 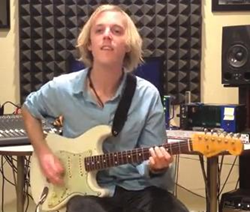 A “riff” is the catchy part of a song that sticks in your head. One of the most recognizable guitar riffs of all time is “Smoke on the water” by Deep Purple.

“You can’t leave out the three kings”, says MacLennan, “you’ve got B.B. King, Albert King and Freddie King”. Jon demonstrates this blues lick as follows; first play the open 2nd string twice and then do a hammer-on to the 2nd fret with first finger followed by the open first string. Next is a slide from the 2nd fret to the 4th fret of the first string with 2nd finger. Jon continues by talking about the techniques of hammer-on’s and slides and gives some advice on practicing them. Next Jon demonstrates the Kansas City Shuffle which is open 6th string and 2nd fret of the 5th string with first finger strummed twice as eighth notes followed by simple moving to the 4th fret with 3rd finger and strummed as eighth notes again (1 & 2 & 3 & 4 &) played using the palm muting technique. MacLennan continues by performing the rest of the riff sequence. Guitar TAB’s are available for this blues guitar lesson at BluesGuitar.com.

Freddie King was an American Blues guitarist and singer from Gilmer Texas. Freddie played the styles of Chicago and Texas Blues and is referred to as one of the “Three Kings” along with Albert King and B.B. king. Over the course of his career he played on 14 studio albums and 10 compilation albums. Freddie is ranked number 15 on Rolling Stones list of 100 Greatest Guitarists of All Time and was inducted into the Rock and Roll Hall of Fame in 2012. Freddie died in 1976 from acute pancreatitis at the age of 42.