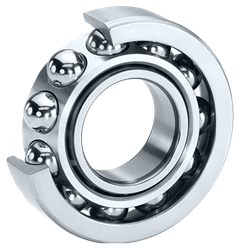 This superb results, serve as another proof of the effectiveness of our additive product range, from both oil and grease lines, in bearing applications.

NanoMaterials Ltd., the innovative nanotechnology lubricants company and a subsidiary of the leading American company: “Nanotech Industrial Solutions, Inc.” (NIS), continues its cooperation with leading bearing manufacturers by utilizing its innovative nano-technology to improve the performance of various bearing applications.

In the second study, conducted on a Closed ZVL Bearing type 6202-2Z, NanoLub® EP Grease Additive was added to the RAS neat Grease, used in this type of bearing, resulting in a nearly 100% increase in bearing service life and about 30% increase in bearing’s dynamic load.

Both case studies can be downloaded here or provided at request by NanoMaterials R&D department.

“We are always happy to test our products with manufactures, especially as reputed in their field of operations as “ZVL SLOVAKIA, a.s.” is in bearings", said Daniel Sclar, NanoMaterials CEO. “These superb results, serve as another proof of the effectiveness of our additive product range, from both oil and grease lines, in bearing applications.”

About NanoLub® Lubricant Additive Series:
The NanoLub® series has received the prestigious Nano 50TM Award by Nanotech Briefs (publishers of NASA Tech Briefs) and it is the first successful commercial implementation of inorganic, multi-layered fullerene-shaped nanoparticles in Extreme Pressure (EP) lubricants, based on patented and award-winning technology developed at Weizmann Institute of Science.

Tests have shown that incorporating NanoMaterials’ inorganic, lubricant additives into oil and grease formulations delivers a range of performance enhancements including:

About NanoMaterials Ltd.:
“NanoMaterials Ltd.” a cleantech company operating in the field of Nanotechnology, was established in 2002 and after its acquisition in 2013 became a subsidiary of the leading American company “Nanotech Industrial Solutions, Inc.” (NIS). A pioneer of inorganic, multi-layered fullerenes, NanoMaterials was the first company to succeed in the commercial production of inorganic, multi-layered nanofullerenes and nanotubes, based on exclusively patented platform technology developed at the Weizmann Institute of Science.

NanoMaterials is part of AddNano, a joint project funded by the European Commission and has earned international recognition winning numerous innovation and excellence awards including: Top 30 Network of Automotive Excellence Innovation Award, Red Herring Top 100 Innovators award, Innovation WORLD 21 award, “Nanotechnology Company of the Year” by the Israeli Ministry of Industry & Trade and Top 10 in the Israeli nano-tech market according to “The Marker” magazine.

The Company’s R&D department is involved in extensive research and testing for additional WS2 based applications in the field of lubricants, coatings and polymer composites for such industries as defense, mining and metalworking.