Indianapolis's "The Beamery" Has Finished the State’s First Certified Passive House: Bringing a New Level of Green to Indiana

It was a long, record-setting winter: thick ice, piles of snow and sky-high energy bills. Now imagine little to no bills all winter, or any other time of the year. 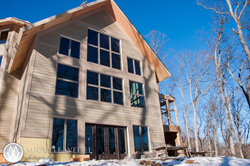 A Passive House is a rigorous, voluntary standard for energy efficiency in a building, reducing its ecological footprint.

How about no furnace at all? That’s reality for people who live in Passive Houses.

Passive design is an extremely efficient style of architecture used by Indianapolis company The Beamery. These innovative homes use 75-95 percent less energy than current new buildings that meet today's US energy efficiency codes.

“This house faces south to get as much solar energy as possible through the windows,” Watters said. “The long vertical windows allow the house to get more sun in the winter, while being shaded as much as possible in the summer time.”

“A Passive House is a rigorous, voluntary standard for energy efficiency in a building, reducing its ecological footprint,” Watters said. “It results in ultra-low energy buildings that require little energy for heating or cooling.”

This specialized standard is not confined to residential properties. Several office buildings, schools, kindergartens and a supermarket have been constructed in the same way. Passive design is not a supplement to architectural design, but a design process that is integrated with the architecture.