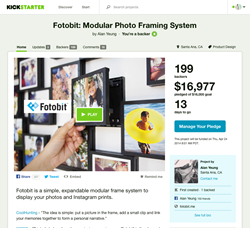 Fotobit, a patent-pending modular photo frame system, is proud to announce it has surpassed its $16,000 goal on Kickstarter halfway through its 30-day raise. With almost 200 backers and 12 days to go, Fotobit has also introduced a $25,000 stretch goal, adding a white color option alongside black for backers pledging at the $80 level and above.

“We are ecstatic that Fotobit has been so well received and want to thank our backers for their support and enthusiasm,” says Alan Yeung, Fotobit co-founder. “We are excited to bring Fotobit to market in the coming months as a result of our Kickstarter funding and are committed to returning the support of our new user community as they create, change and grow their Fotobit displays.”

A homegrown passion project of the team at CRISP^YHKG, an Orange County product design, branding and marketing agency, Fotobit is a first-of-its-kind system that allows you to create your own beautiful wall display of photos by easily clipping frames together, allowing for limitless possibilities and custom combinations. The Fotobit system is perfectly suited for digital photography enthusiasts who love using Instagram to capture their memories. Lightweight frames hold 4” x 4” prints protected by a clear acrylic window. Engineered for ultimate scalability, the Fotobit system starts with a single frame mounted to the wall. Fotobit frames attach together easily and securely with durable clips, providing an expandable, cost-effective framing system for creating both small and large-scale photo mosaics.

Fotobit’s 30-day Kickstarter campaign will be funded on April 24 with rewards for backers that start at a three-pack of black Fotobit frames for $30 pledges. Newly added to the rewards are white frames, available as an option at the $80 pledge level and above. As an added value, Kickstarter backers who choose any quantity of frames as their rewards will receive vouchers for complimentary digital prints courtesy of Printstagram, who has partnered with Fotobit in order to deliver a fully-fledge experience out of the box.

For more information and to lend your support and be one of the first to have Fotobit, visit Fotobit’s Kickstarter page at: http://kck.st/O9v7HZ

Fotobit media samples are available upon request. Please reply with your shipping details if you are interested in receiving a kit.