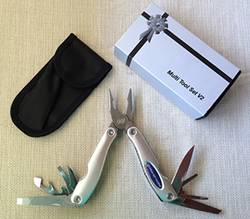 To celebrate their forum relaunch, everyone who registers for the GSW forum before May 15, 2014 will be entered in a drawing to win a GSW Multi-tool.

Georgia SoftWorks has reopened their Telnet Server and SSH Server for Windows Support Forums to provide another method of customer support.

“We had to close our forums previously due to the large amounts of spam posts,” said Doug Hitchcock of Georgia SoftWorks. “We were getting hundreds of spam posts every day. We have figured out the spam solution and are ready to use our forums as another outlet of technical support.”

The GSW Forums have also been re-designed since they were last opened to the public.

“In addition to the spam problem, the forums from several years ago were in need of a design update. The new design is more aesthetically pleasing and will be easier to navigate,” said Hitchcock.

The forums will provide a community of help to users who have questions. The GSW Support Team will frequent the boards to offer support. GSW announcements can also be seen on the Forum page.

To celebrate their forum relaunch, everyone who registers for the GSW forum before May 15, 2014 will be entered in a drawing to win a GSW Multi-tool.

Georgia SoftWorks is a software development company located in Dawsonville, GA (USA). They are most known for the development of the GSW Telnet Server for Windows and SSH Server for Windows. The broad spectrum of industries that use the GSW software has led to their continually growing number of resellers and end users all over the world.