Online Marketing Agency Wpromote Finds Smartphone and Tablet Share of Traffic Continues to Rise at the Expense of Desktop; Now Accounts for One-Quarter of All Visits 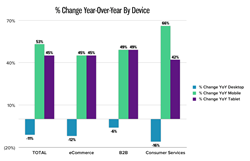 The transition to mobile is just that, and mobile adoption isn't universal yet. -Michael Mothner

Web traffic from mobile and tablet devices jumped 50 percent over the past year and now accounts for more than a quarter of all visits, according to data from online marketing company Wpromote.

Wpromote surveyed traffic to 35 client websites in three general industries: e-commerce, business-to-business and consumer services. The numbers show that desktop web traffic continues to decline, dropping from 88 percent to 82 percent to 73 percent in the first quarter of the past three years.

Mike Mothner, CEO of Wpromote, said the shift means companies should be embracing mobile marketing strategies – such as mobile advertising, responsive design and developing mobile sites that encourage customers to take action on their devices – and planning for the day when mobile overtakes desktop.

“The transition to mobile is just that, and mobile adoption isn’t universal yet,” said Mothner. “Despite this, marketers should constantly ensure that their strategies and tactics are aligned with the transition to mobile. The data shows that mobile overtaking desktop in terms of web traffic is a matter of when, not if.”

Of the three major industries evaluated, B2B customers remain the most reliant on desktop. Seventy percent of e-commerce visitors and 66 percent of consumer services visitors are using a traditional computer, compared to 83 percent of B2B site visitors. All industries have seen at least an 8-point decline in desktop traffic as smartphone traffic more than doubled from 2012 to 2014.

“Regardless of industry, a 50 percent increase in smartphone traffic in a year is a strong indicator of consumer preference,” said Mothner. “Marketers should evaluate their strategy in light of changing habits on a regular basis instead of playing catch-up when mobile traffic hits an even larger milestone.”