Anniversary celebrations will be held across the company starting with Los Angeles in mid-April. 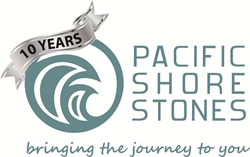 April marks the tenth anniversary of Pacific Shore Stones, a nationwide importer and wholesaler of exotic natural stones which was founded in Los Angeles in 2004. Since then, the company has grown to its current size of thirteen locations and spread from California across the central and eastern regions of the US. The newest location in Charleston, South Carolina means that the company now stretches from coast to coast.

Having opened in LA in 2004 and quickly established a flourishing business, the owners took the decision to expand into the Texas market in 2006, opening first in Austin and then in San Antonio the following year. 2008 started with the opening of a new location in Bakersfield, California, followed later that same year by Oklahoma City, and rapid growth in this market enabled them to continue in this region, opening Tulsa in 2009.

2010 heralded the opening of new Pacific Shore Stones locations in Little Rock, Arkansas and Arroyo Grande on the California coast. 2011 was a year of exponential growth and resulted in four new locations - two in California in Fresno and Oxnard, plus one in Memphis, Tennessee and Birmingham, Alabama. This year also saw the company start selling fabrication tools in the Oklahoma market, and enter the engineered stone market through a partnership with Compac quartz.

Last year, Charleston in South Carolina became the thirteenth location through an acquisition, and the company is now able to serve more areas on the east coast. 2013 also brought a new engineered stone partnership with Caesarstone, enabling Pacific Shore Stones to offer more variety and further choices for their customer base.

Operating Partner Vinny Tavares commented on the tenth anniversary, saying, "When we first started the business, the original idea was for us to be a local supplier, but we are extremely proud to have achieved so much more and to be able to offer service to regular customers in 22 states and locations throughout the south.” Operating Partner Marco A. Pereira also shared his thoughts on the anniversary: "It’s been a great journey so far. I’ve been fortunate to build so many great relationships and have countless amazing experiences. We are thankful to everyone that participated in our success from the first day we opened our doors ten years ago."

This year, anniversary celebrations will be held across the company starting with Los Angeles in mid-April. As well as recently joining the Marble Institute Safety Committee, Pacific Shore Stones will be sponsoring the MIA t-shirts at Coverings, a national stone exhibition, to mark the 10th anniversary with a limited edition shirt.

Pacific Shore Stones is a leading importer and wholesaler of exotic natural stones. Established in 2004, the company offers a wide selection of granite, marble, travertine, onyx, limestone, soapstone and engineered stone. Pacific Shore Stones has developed joint ventures with quarries across the world, built on strong relationships, providing access to the finest blocks. The company owners regularly visit quarries in places such as Brazil, Italy, Spain, India and Turkey, enabling them to keep up with new trends and to purchase unique stones.

The company distributes high quality, hand selected stone through 13 company-owned distribution centers across the U.S. Each center has a large inventory of over 120 colors plus knowledgeable staff delivering expertise and first class customer service.