Angelo Armenti, Jr., the president of the Pennsylvania Association of State Colleges and Universities (PASCU) defines “government higher education” as what students get when the State controls more than 50% of the governance seats, while providing less than 50% of the annual funding; he cites Pennsylvania as an extreme example for clinging to 100% control but providing only 25% of the funding. 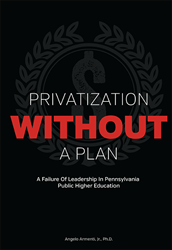 Privatization Without a Plan

Privatization without representation is a tyranny that the majority stakeholders must come together to rise up and throw off.

According to Angelo Armenti, Jr., the president of the Pennsylvania Association of State Colleges and Universities (PASCU), privatization—the rapid defunding by the State—of public higher education has been happening in Pennsylvania and many other states for at least the last three decades. In his recent book¹ entitled, Privatization Without a Plan, he shows that privatization is largely unavoidable as well as irreversible due to powerful demographic and economic forces that are due to a rapidly aging America.

In a book entitled Strategic Management: A Stakeholder Approach (1984), R. E. Freemen defines a “stakeholder” as “any group or individual who can affect, or is affected by, the achievement of an organization’s purpose.”

With respect to the Pennsylvania State System of Higher Education (PASSHE), an organization which defines itself as a system of 14 public universities with more than 112,000 students and 600,000 alumni, Freemen’s “stakeholder” definition clearly applies to the PASSHE students, parents and donors, primarily alumni, whom we have previously referred to as PASSHE’ s “Majority Stakeholders.” These individuals meet the “stakeholder” definition because they are clearly “affected by” the achievement (or not) of PASSHE’s purpose: ‘High quality education at the lowest possible cost to the students.’” They also meet the definition of “Majority” stakeholder since, as a group, they now provide 75% of the annual funding.

Even in 1983, when the state colleges became state universities and the State share of PASSHE’s budget had fallen to 63%, and the share paid by students and parents grew to 37%, there was still no clamor for representation by students and parents, no doubt, because the State was still the majority stakeholder, a situation that didn’t change until 1993, when the State share of PASSHE’s budget first fell below 50%.

But in the 21 years since 1993, the State share of PASSHE’s budget has plummeted to 25%, and the share provided by students, parents and donors, primarily alumni, has skyrocketed to 75%.

Stakeholder theory, according to Armenti, places great emphasis on organizational process and in particular, on the role of major stakeholders in the decision-making process. It is clear, with PASSHE’s Majority (75%) Stakeholders controlling 0% of the governance seats, that their best interests cannot possibly be getting served very well under such an un-American arrangement.

As shown in Privatization Without a Plan, the privatization of public higher education in Pennsylvania has been happening inexorably since July 1, 1983, the day the PASSHE system of universities first began. A careful reading of Act 188 will reveal that its authors, in apparent anticipation of such a privatization, included many new provisions that would for the first time not only enable, but facilitate, encourage and celebrate the raising of private funds to enhance the 14 Universities by supplementing State funding.

And while the authors of the original Act 188 anticipated the need for alternate funding to complement rapidly shrinking State funding, they sadly did not foresee a need to change the way the members of the Board of Governors and the Councils of Trustees were selected, and to give a direct decision-making voice to the students, parents and private donors,primarily alumni, who now pay 75% of PASSHE’s bills.

“Government” higher education, as practiced in Pennsylvania under its current version of Act 188, locks in an organizational structure that places no limit on how small the State’s share of PASSHE’s budget can become while, at the same time, preserving at 100%, the share of the governance seats controlled by the Minority (25%) stakeholder—the State—in the person of its elected and appointed officials.

It is in that sense that “government” higher education condemns PASSHE students to a life sentence of privatization without representation, a tyranny that the majority stakeholders must come together to rise up and throw off, before they can claim their rightful place at PASSHE’s decision-making tables.

The Role of PASCU
PASCU’s mission is “To ensure that the statutory purpose of public higher education in Pennsylvania as specified by Act 188 of 1982: ‘High quality education at the lowest possible cost to the students,’ is indefinitely preserved and faithfully delivered.” To advance that mission, PASCU seeks to reform the governance of PASSHE so as to enable it achieve its statutory purpose as mandated by Act 188.

ABOUT THE AUTHOR
Dr. Angelo Armenti Jr. served as President of California University of Pennsylvania (Cal U) from 1992 to 2012. Before that, he was a Dean at Villanova University, a professor of physics, and author of The Physics of Sports (American Institute of Physics, 1992). During his career at Cal U, Armenti is credited with establishing numerous funding sources for student scholarships and for campus revitalization projects, efforts made in part to address the problems that he describes in Privatization Without a Plan. In June of 2012, Armenti founded a non-profit corporation entitled The Pennsylvania Association of State Colleges and Universities (PASCU) whose mission it is to preserve the statutory purpose of public higher education in Pennsylvania. He also writes for his blog at http://angeloarmenti.blogspot.com/.