Announcement: SongTabs.com Releases “How to Play 'Just the Way you are' by Bruno Mars - Acoustic Guitar Lesson” 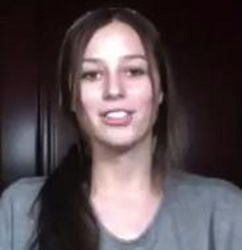 Paige starts off this easy video guitar lesson by mentioning that a capo is used on the 4th fret for this song. Next she goes over the chords that are used for the song and they are; D, Bm (B minor) and G, all of which are played in the open position. Zollars says that the chord progression is; D – Bm – G – D and that each chord gets two measures of four beats each. Paige demonstrates the strumming down down down up down up down up down up down up and is counted as 1 & 2 & 3 E & A 4 E & A, this sequence is repeated twice for each chord. Paige continues this easy guitar lesson by demonstrating how the song is played and sung so anyone can easily follow along with her. Guitar chord charts and guitar TAB’s are available at SongTabs.com.

A Capo, short for capotasto, which is Italian for “head of fret board,” is a device used on the neck of a fretted instrument to shorten the playable length and raise the pitch.

Peter Gene Hernandez, aka Bruno Mars, is an American singer/songwriter, producer, voice actor and choreographer from Honolulu Hawaii. Over the course of his four year career he has won two Grammy Awards and sold over 10 million albums worldwide and 68 million singles, four of which are considered the best selling singles of all time. Mars is considered as one of the most successful solo artists of all time with 5 number one singles on the Billboard Top 100 since the launch of his career in 2010.

Has been a singer and song writer for the last 6 years and performs at fairs and coffee shops in her area. She has an original song “Broken” available on ITunes and works for a company called KlabLab where she makes educational songs for the classroom.