Celebrated as one of the leading lifestyle film festivals in the United States, the 15th Annual Newport Beach Film Festival (NBFF) brings the best of classic and contemporary filmmaking from around the world to Newport Beach for eight spectacular days, April 24 – May 1, 2014 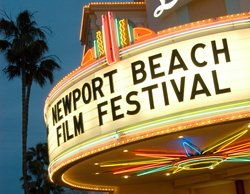 On Closing Night, NBFF proudly presents CHEF starring Jon Favreau, John Leguizamo, Scarlett Johansson and Robert Downey Jr. and directed by Jon Favreau. A talented chef who unexpectedly loses his restaurant job starts up a food truck in an effort to reclaim his creative promise – all while trying to piece back together his estranged family. The Closing Night film and party will take place at Via Lido Courtyard (3417 Via Lido, Newport Beach, CA 92663).

The Action Sports Film Series, an international showcase of films celebrating athletes, visionaries, filmmakers, cinematographers, pioneers, environmentalists, entrepreneurs, and artists, who have shaped the action sports culture and cultivated its progression with their innovation, energy and creativity. The Action Sports Film Series will spotlight 15 films from around the world including BELLA VITA, CHASING GIANTS, FLUX: REDEFINING WOMEN'S SURFING, H2MEXICO (World Premiere), INTO THE MIND, LAND OF PATAGONES (TIERRA DE PATAGONES) (World Premiere), THE OLD, THE YOUNG & THE SEA, ONE INCH FROM FLYING, OUT IN THE LINE-UP (North American Premiere), SERENDIPITY, STAND, STEPHANIE IN THE WATER, TALLY-HO, WITH A KITE and XOXO

The 2014 Newport Beach Film Festival Art, Architecture + Design Film Series (AA+D) will spotlight films that celebrate art, architecture, design, fashion, urbanism, photography and subculture. The international showcase of films explores both historical and contemporary subjects, projects, concepts from the artistic realm that have defined visual cultures around the globe, both past and present. The AA+D Film Series will showcase 10 films from around the world including: CITIZEN OF THE PLANET, FABERGÉ: A LIFE OF ITS OWN, HAIRY WHO & THE CHICAGO IMAGISTS, IMPOSSIBLE LIGHT, LYON HOUSEMUSEUM, THE MAKING OF AN AVANT-GARDE: THE INSTITUTE FOR ARCHITECTURE AND URBAN STUDIES 1967-1984, TELOS: THE FANTASTIC WORLD OF EUGENE TSSUI, NO STRANGERS, OBEY: THE ARTIST and SBOCCIARE.

The Newport Beach Film Festival will present 30 documentaries including several World Premieres and North American Premieres. Highlights include Flake and Flames, which exposes the expansive and overwhelmingly creative world of Kustom Kulture, a collection of art forms traditionally frowned upon by society but rapidly growing in popularity and esteem. Additionally, the Festival will present the West Coast Premiere of UNA VIDA: A FABLE OF MUSIC AND THE MIND as the 2014 Music Spotlight Film. Other titles include ALTHEA (WORK IN PROGRESS), A YEAR IN CHAMPAGNE, BEFORE THE REVOLUTION, BEHIND THE BLUE VEIL, BUTTERFLY GIRL, CHILDREN OF INTERNMENT, DON'T QUIT: THE JOE ROTH STORY, EARTHQUAKE (WORK IN PROGRESS), FOLLOW FRIDAY THE FILM, GIVE US THIS DAY, GLENA, GORE VIDAL: THE UNITED STATES OF AMNESIA, HALF THE ROAD: THE PASSION, PITFALLS & POWER OF WOMEN'S PROFESSIONAL CYCLING, HUNTINGTON'S DANCE, IBOGA NIGHTS, LOVE ME, MENTOR, ONE OCEAN: NO LIMITS, OUR MAN IN TEHRAN, SONS OF AFRICA, TAKING MY PARENTS TO BURNING MAN, THE AGE OF LOVE, THE HUMAN FACE OF BIG DATA, THE MILKY WAY, TRACE AMOUNTS, UNTOUCHABLE: CHILDREN OF GOD, U.S. SURF SKI CHAMPS: FOGGY DOWNWIND DANCE, WELCOME NOWHERE AND WHO TOOK JOHNNY

The Newport Beach Film Festival continues its proud tradition of hosting some of the best shorts filmmakers in the world with its numerous and genre-spanning shorts series. Uniquely curated into thematic programs, the Festival will screen over 200 short films in categories ranging from romance to animation, from comedy to documentary.

The Newport Beach Film Festival seeks to raise awareness of important issues affecting our environment through cinema. The Festival’s “Eco Spotlight” is FARMLAND from Director Jason Moll. Other highlights include ONE GOOD YEAR, SLINGSHOT, TIDELINES, A WILL FOR THE WOODS and URANIUM DRIVE-IN

The Newport Beach Film Festival’s Music Film Series features nine films that put music center stage, highlighting musical performances, historic headlines, and the unique stories behind struggling musicians. The Festival will present the West Coast Premiere of UNA VIDA: A FABLE OF MUSIC AND THE MIND. Other highlights include KEEP ON KEEPIN’ ON, a narrative about mentor Clark Terry and Justin, a blind piano prodigy, and their fight to tackle the toughest challenges of their lives; I’LL BE ME, two years ago, music icon Glen Campbell was diagnosed with Alzheimer's disease and told to hang up his guitar and prepare for the inevitable; WELL NOW YOU’RE HERE, THERE’S NO WAY BACK, after losing his best friend and band mate to a drug overdose, 80's metal rock star Frankie Banali must forge ahead to conquer his loss, regain his life, and get the band back together one more time, BOTSO, FOLLOWING THE NINTH: IN THE FOOTSTEPS OF BEETHOVEN’S FINAL SYMPHONY, THE FRONT MAN, GREAT VOICES SING JOHN DENVER, MUSIC CITY USA. In addition the Festival’s Music Video Program, designed to showcase the medium’s unique partnership of film and music, will feature 17 music videos from artists from around the word, including Young the Giant’s MIND OVER MATTER, David Bowie’s THE STARS (ARE OUT TONIGHT) and Passion Pit’s CRY LIKE A GHOST.

A 50th ANNIVERSARY RETROSPECTIVE WITH MACGILLIVRAY FREEMAN FILMS
For fifty years, Orange County filmmaker Greg MacGillivray and his team at MacGillivray Freeman Films (MFF) have been making films that surprise and delight audiences—from the classic surfing documentaries A Cool Wave of Color and Five Summer Stories to collaborations on such Hollywood films as The Shining and Big Wednesday to award-winning IMAX films like Everest, The Living Sea and To The Arctic. Along the way, MFF has twice been nominated for an Academy Award, and has won numerous accolades including three films in the Imax Hall of Fame. The MFF crew has literally traveled to the most remote corners of the globe to bring back stories and images that immerse audiences in places that few will ever experience first-hand.

In these two special 50th anniversary events, director Greg MacGillivray will take viewers behind the scenes of some of his most iconic films:
The first event is a retrospective screening of Greg MacGillivray and Jim Freeman’s surf cult classic FIVE SUMMER STORIES, followed by a panel discussion with surfing luminaries Laird Hamilaton, Gerry Lopez, Peter Townend, Herbie Fletcher, Greg MacGillivray and Steve Pezman who will discuss the impact of the film and the dramatic changes in surf culture of the ‘70s. Heralded as the finest surf movie ever made, FIVE SUMMER STORIES is a cultural icon, a time capsule from a watershed era when the world was at a critical crossroads and its reflection was clear in the emerging sport/art of surfing. Against a backdrop of the Vietnam War and the Nixon years, FIVE SUMMER STORIES movie portrays a young, outlaw sport at a strategic point in its creative evolution--and at a historical crux in time.

In the second event—A RETROSPECITIVE EVENING WITH MACGILLIVRAY FREEMAN FILMS—producer/director Greg MacGillivray will take the audience on a multi-media journey around the world as he shows clips and shares tales from his most memorable filmmaking expeditions. Moderated by entertainment journalist John Horn of the Los Angeles Times, the event will culminate with the Orange County premiere of the company’s newest film JOURNEY TO THE SOUTH PACIFIC, narrated by Academy Award winner Cate Blanchett and originally produced for IMAX theatres, about a young island boy’s adventures amid the islands of West Papua.

YOUTH FILM SHOWCASE
The Newport Beach Film Festival is proud to celebrate the 10th Anniversary of the Youth Film Showcase. Created to serve as a forum for young filmmakers and to encourage freedom of expression through cinema, the Youth Film Showcase will spotlight fourteen short films created by filmmakers 18 years and younger.
FAMILY
The Newport Beach Film Festival's Family Film Series brings to Orange County a diverse slate of studio and independent family films from around the world. With its diverse programs geared towards toddlers, school age children, tweens, teens, parents and grandparents, the Family Film Series gives filmgoers of all ages an opportunity to view a unique collection of refreshing cinematic works from around the globe, including feature-length narrative, documentary, short and animated films. The Family Film Series will present A LITTLE GAME and two shorts programs: SHORTS FOR SHORTIES and TEENS & SHORT TWEENS.
COLLEGIATE

The City of Newport Beach Arts Commission and the Newport Beach Film Festival will present a series of interactive panels that focus on the art and process of filmmaking. The free educational event will feature talented and distinguished film industry professionals. The Festival invites the audience to go behind the scenes with some of the industry's leading filmmakers as they share their extensive knowledge and insight into the business and art of today's entertainment world. The NBFF will host a free cinematographer master class with some of the most prominent cinematographers from our time, organized by Variety. The Festival will also host free screenwriting, directing and music seminars.
UK SPOTLIGHTS

The Newport Beach Film Festival will present a special screening of the groundbreaking MARY POPPINS. Celebrating its 50th year anniversary, 5-time Academy Award winner and quintessential Disney favorite, Mary Poppins has charmed and delighted audiences since its release in 1964. Through the vision of Walt Disney and the unequaled songwriting of the Sherman Brothers, the famous work of P.L. Travers was brought to life against all odds as seen in this year's Oscar nominated biopic Saving Mr. Banks (2013).

Please join us after these Spotlight and Showcase screenings for one of our gala post-events.