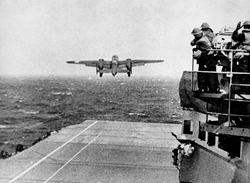 A B-25 taking off from Hornet for the raid

We're honored to have Lt. Col. Cole as the parade's Grand Marshal, as he co-piloted one of the most daring raids in U.S. history.

Today, the American Veterans Center (AVC), which represents all who’ve served our country, announced that a co-pilot of the daring Doolittle Tokyo Raid from World War II, Lt. Col. Richard E. Cole, will be this year’s Grand Marshal of the National Memorial Day Parade. Lt. Col. Cole is 98 years old.

The announcement comes on the 72nd anniversary of the Doolittle Tokyo Raid, which occurred in April of 1942. It was the first air raid to strike the Japanese Home Islands, and it demonstrated Japan’s vulnerability and boosted U.S. morale following the attack on Pearl Harbor.

The parade will process along Constitution Avenue in Washington, D.C. on May 26th beginning at 2:00 p.m. and will feature heroes from every conflict, as well as current service members, celebrities, and VIP’s.

“The National Memorial Day Parade celebrates the courage of all military heroes and gives us a chance to come together to remember those who gave their lives for our country’s freedom. This year, we’re honored to have Lt. Col. Cole as the parade’s Grand Marshal, as he co-piloted one of the most daring raids in U.S. history. Of the 80 men who participated in the Doolittle Raid, only four survive today. They stand as some of the first heroes of World War II, and we applaud their courage that ultimately changed the course of our nation’s history,” says James Roberts, President of the American Veterans Center (AVC).

During the raid, sixteen B-25 bombers were launched from the Navy’s aircraft carrier, the USS Hornet, for the first time in history. Each plane had a crew of five men. Although all of the aircraft were lost, most of the men returned safely. Eight crewmen were captured by the Japanese, and three were executed. Of the original raiders, only four are still living.

The Doolittle Tokyo Raiders are currently being considered for the Congressional Gold Medal, one of our nation’s highest expressions of appreciation for distinguished achievements. The Senate has already approved the resolution, and a vote is expected as early as May in the House.