Ticket Down has rolled back ticket prices on Luke Bryan in Atlanta, GA at Aaron's Amphitheatre at Lakewood on Friday, 7/25/14 and Saturday, 7/26/14. This popular secondary ticket exchange is also offering their exclusive customer appreciation promotion promo code LUKE-BRYAN-2014 for additional savings. 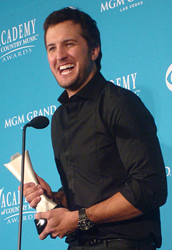 Luke Bryan to Headline in Atlanta on July 25th and 26th, 2014 at Aaron's Amphitheatre at Lakewood

Ticket Down is a reliable source for affordable Luke Bryan concert tickets in Atlanta, GA at the Aaron's Amphitheatre at Lakewood. Luke Bryan was born in Leesburg, Ga. and has quickly risen up the ranks of country music royalty since entering the music business in 2004. He started out writing songs for stars like Travis Tritt and Billy Currington and as soon as he got a record deal, became a superstar. The 37-year-old has released four studio albums and is always one of the most desired country performers to see live each summer. This summer, he is taking Lee Brice and Cole Swindell on the road as part of the “That’s My Kind of Night Tour.” Among the stops these three country superstars will be making include Aaron’s Amphitheatre at Lakewood in Atlanta, GA.

There will be two shows in Atlanta (July 25th and July 26th) at the 19,000 seat venue. There are 7,000 seats under a cover, while there is room for 12,000 fans in the lawn section. The venue opened in 1989 with the sole purpose being to bring in popular artists. The facility has world class acoustic sounds that make it a popular venue for the performers and for the fans in attendance.

When Bryan, Brice and Swindell make their way to the venue for their show this summer, fans will witness three of the top acts in country music today. Swindell became a household name in 2013 following the success of his debut single, “Chillin’ It.” The single was called the song of the year by Sirius XM’s The Highway, which was actually the first country station to play the song. He has since released an additional single “Hope Your Get Lonely Tonight,” which are both on his debut album, Cole Swindell. The album has reached as high as the No. 2 position on the Billboard country charts.

Earlier this month, Brice earned “Song of the Year” honors at the Academy of Country Music Awards for his hit song, “I Drive Your Truck.” The touching song was the anthem for many men who experienced the loss of their father and hold on to that special memory anyway they can. Brice has been around the music scene since 2007 and has released two studio albums. His 2012 release, Hard 2 Love, has been his best statistically. The album has been certified gold by the Recording Industry Association of America for selling more than 500,000 copies in the United States.

While Swindell and Brice are great performers, the act that most fans in Georgia will be paying to see is Bryan. Bryan has been one of the most popular performers since breaking out in a big way. Even before he became a household name, he was a star songwriter and had some of his songs performed by Billy Currington and Travis Tritt. Among his most popular songs that fans will want to hear him perform at the Aaron’s Amphitheatre at Lakewood include “Drink a Beer,” “That’s My Kind of Night,” “Play It Again,” “Do I,” “I Don’t Want This Night to End,” and “Drunk On You.”

Ticket Down delivers tickets to sold out concerts and events worldwide when no one else can, and they do so at discounted prices. This popular ticket exchange also has cheap Luke Bryan tickets in Atlanta. Add promo/coupon code LUKE-BRYAN-2014 for added savings on any ticket order.

Check out our discount codes online for all upcoming events. Ticket Down has low overheads which allow this well-known ticket site to keep prices competitive.