In this blues guitar lesson sample video, now available on YouTube.com, Jon MacLennan teaches how to do chordal soloing over a G blues. 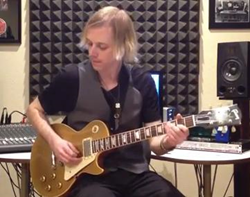