SouthAmerica.travel Offers a Tour Package to a Lesser-Known Region of Brazil, the Lençóis Maranhenses

SouthAmerica.travel offers a tour package to a lesser-known region of Brazil, the Lençóis Maranhenses National Park and surrounding region. 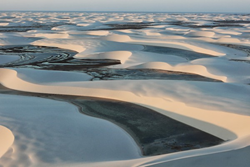 Over the past decades, tourism to these beaches, deserts, and fishing villages has often been routed via airplane. But this new tour package emphasizes the natural beauty of these destinations by linking them overland.

The tour operator SouthAmerica.travel now offers a tour package to Fortaleza Jericoacoara, São Luís, and Lençóis Maranhenses, which are lesser-known tourist sites in the northeastern coast of Brazil in the state of Maranhão.

"Over the past decades, tourism to these beaches, deserts, and fishing villages has often been routed via airplane. But this new tour package emphasizes the natural beauty of these destinations by linking them overland," explained Jürgen Keller, the CEO of SouthAmerica.travel. The tour is best for those travelers who favor comfort and scenery.

The distances between locations are widespread, but by taking time to enjoy each location and stopping at interesting sites and comfortable pousadas (boutique hotels) along the way, it’s possible to explore and experience a colorful part of Brazil that many tourists miss.

The nine-day trip begins in Fortaleza, the fifth largest city in Brazil and the capital of the state of Ceará. Tourists can relax at a beachfront hotel after their arrival and walk on Iracema beach.

The following day includes a half-day city tour, including visits to several museums, markets, landmarks, and beaches. Some sights included are the Metropolitan Cathedral, the Central Market, the Wax Museum, and the Meireles, Mucuripe, and Praia do Futuro beaches. The afternoon is dedicated to Jericoacoara, approximately 300 km away. At the beach town, travelers can relax in a pousada overlooking the Atlantic Rainforest and beach. The Por-do-Sol sand dune allows visitors to watch the sunset over the ocean, a unique viewpoint in Brazil since most of its coastline faces east.

Day 3 is a free day to spend in Jericoacoara, often referred to simply as “Jeri.” There are low-hanging hammocks in the shallow, warm waters, so tourists can relax while dipping their toes in the water. There are also freshwater lagoons at the Lagoa Azul, and several other beaches and coves that constitute a national park. Other popular activities include sandboarding over the sand dunes, and water sports.

The following day requires a sense of adventure as the transfer from Jericoacoara to Barreirinhas, about 300 km, includes a ride along the sand dunes in a 4x4 vehicle. This is the most scenic way to see the dunes and coastline along this mostly deserted stretch of land. Arrive in Barreirinhas, the town closest to the Lençois Maranhenses National Park.

Days 5 and 6 include the most spectacular of coastal deserts in Brazil, the Lençois Maranhenses. Here, tourists can spend a couple nights exploring the dunes, deserts, and freshwater lagoons, as well as the Delta of the Americas. Guided 4x4 excursions and walks through the park are included in the tour package.

Continuing on, the tour heads to São Luís, a city built on the São Luís Island about 250 km from Barreirinhas. Tourists can take a half-day city tour of the beaches encircling the island, as well as museums, churches, and other interesting sights. The evening is spent at a hotel in the historic district of São Luís.

The final full day of the tour is an excursion to the colonial city of Alcântara, just 30 km from São Luís and accessible by boat. Its French colonial history makes it unique among Brazil’s otherwise Portuguese colonial cities. Declared a national historic site, Alcântara’s streets and historic buildings feature colonial tile work and colorful mosaics. Some 17-century Baroque buildings of note include St Matais Church and Carmo Church.

The following morning, transfer to the airport for the flight out of São Luís. It is also possible to arrange the tour in the reverse order, starting in São Luís and ending in Fortaleza, and to customize the itinerary further, such as how this group organized their trip.

For a detailed itinerary that includes these locations, view the Northern Brazil Beaches Tour itinerary here.