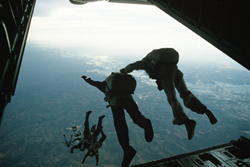 Jumpmaster Software On The Garmin fenix 2 Was A Game Changer

I was shocked when some military customers called me and said they had found Jumpmaster software on their fenix 2's...

fenix 2 is now the best military watch for 2014 because it has the Jumpmaster software and more fitness features than the Tactix according to the Heart Rate Watch Company.

"I was shocked when some military customers called me and said they had found Jumpmaster software on their fenix 2's," says Squire. He adds, "I wasn't looking for it but Garmin does not even advertise the fact that it is there."

"Garmin Tactix does have non-glare glass and a backlight that won't flare out or compromise your position, so for true special ops forces it is still the best option", says Squire. He adds, "If you are not in special ops it adds so many fitness features over the Garmin Tactix that the fenix 2 is a no-brainer."

"The fenix 2, which is now out of stock until May 9th due to its huge popularity, adds run cadence, vertical oscillation and a very intuitive sports menu to the mix, plus it has all the navigation features of the Tactix," says Squire. He adds, "for all but the serious special forces folks this makes the Garmin fenix 2 the best military watch ever made because of all the advanced fitness features."

"The Jumpmaster software being installed on the Garmin fenix 2 took me totally by surprize," says Squire. He adds, "I actually thought that this feature would've been exclusively added on the Tactix, which is why I now have to advize military personnel to carefully look at the fenix 2 unless they are strictly special ops."

"If you would like to talk to a real expert regarding the Garmin fenix 2 or any other watches than simply call us at 866-586-7129", says Squire. He adds, "We think you'll appreciate talking to folks that actually test and use the products they sell."