Jeff Wallace's New Book "In God We Trusted" Focuses on Separation of Church and State in Miss. 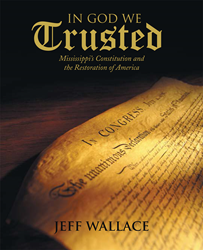 Truth is an absolute that will stand the test of time.

Can the issues of today be solved by learning about the past? Award-winning Christian author, Jeff Wallace did some digging into the nation’s history and reveals a solution for the present.

After finding many contradictions within his own state’s constitution, Wallace uses his extensive research of historical facts and documentation to unveil Christianity as the true basis of the nation as reflected in his new book, “In God We Trusted.” These documents represent the rationale behind the political documents that formed the nation. By returning to the founder’s ideals, Wallace claims the U.S. can become more united on a path towards restoration.

What Wallace uncovers is not taught in schools due to separation of church and state regulations. These regulations contradict Mississippi’s Constitution, which supports exposing the nation’s Christian roots instead of hiding them. It is this withheld information that can change the course of action within the U.S. today.

“By properly educating our nation on the principles that are the basis and foundation for all of our laws, constitutions, and the original reasons for our nation's founding, we will be able to chart a course that will restore our nation back to its original purpose,” Wallace said.

Wallace challenges readers to seek out information and educate themselves about their country.

About the author
Wallace is the winner of 2010 Christian Choice Book Award for his first book and currently the vice president for Wallace Window Cleaning Co. He holds an associate degree in theology from Way College of Biblical Research. For more than three decades he has been involved in non-denominational Christian outreach and teaching ministries. Wallace is married with two sons.