CAF Event to Honor the Women of the Greatest Generation 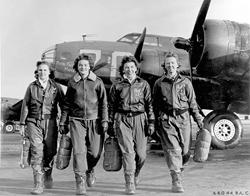 The sights and sounds of The Greatest Generation will come alive when the Commemorative Air Force (CAF) Dixie Wing hosts the eleventh annual “WWII Heritage Days” April 26-27, 2014. The history festival will be held at The Historical Airpower Facility, Atlanta Regional Airport-Falcon Field, Peachtree City, GA from 9am-4pm both days.

The theme of the 2014 opening ceremony, Honoring The Women of The Greatest Generation, will pay tribute to women who served in the military and on the Home Front. Lt Col Nancy Dakin, USAF will be the key note speaker for the program, while Peachtree City Mayor Vanessa Fleisch will welcome visitors to Peachtree City. Colonel Dakin is a pilot and Commander of the 116th Aircraft Maintenance Squadron, 116th Air Control Wing, Robins Air Force Base. Maj Gen George Harrison, USAF, Ret. will serve as master of ceremonies.

Activities begin Saturday at 9:30am with a patriotic music program performed by Bombshells United.

At noon, the public while have an opportunity to three women of The Greatest Generation when a Rosie the Riveter and two female Army veterans share their stories. Betty Bishop helped assemble Bell P-63 King Cobras, while Gisela Titman and Myrtle Faye Edwards both volunteered in the Women’s Army Corps. Betty Bishop will be reunited with a King Cobra for the first time in 70 years when she inspects the Dixie Wing’s P-63 under restoration.

Almost 400,000 women served in and with the armed forces during World War II, including 74,000 women in the American Army and Navy Nurse Corps. More than 1,000 women served as pilots associated with the US Air Force in the WASP (Women Air Force Service Pilots), but were considered civil service workers, and weren't recognized for their military service until the 1970s.
On July 1, 2009 President Obama signed into law S. 614, a bill awarding a Congressional Gold Medal to the WASP.

Why turn a flying museum into a classroom? “Our goal is to preserve and teach the story of The Greatest Generation, the men and women who won the Second World War,” explained Buckley.

Suggested donation for “WWII Heritage Days” is $5. Active duty military in uniform and Children 5 and under free. “WWII Heritage Days” will be held rain or shine. Please no pets. Advance tickets for “Keep ‘em Flying” are $50, $60 at the door. Reserved tables and group discounts available. All ticket sales final. For tickets call 678-654-2464. For more information about the weekend, please visit http://www.wwiidays.org or call 678-364-1110.