North American Power is proud to announce the company has reached over one million dollars in total giving through its charitable initiative, Mission to Millions. 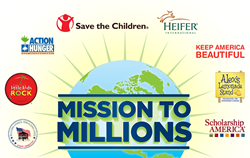 With Mission to Millions, North American Power customers can truly create substantial change in their community.

North American Power, one of the nation’s fastest-growing retail energy suppliers, is proud to announce the company has reached over one million dollars in total giving through its charitable initiative, Mission to Millions. Coinciding with the third year anniversary of the program, this accomplishment brings North American Power one step closer to the program’s ultimate goal of donating millions to worthy causes and making a difference in the lives of others.

“With Mission to Millions, North American Power customers can truly create substantial change in their community, simply by doing something they already have to do – pay their energy bill,” said Kerry Breitbart, Founder & CEO of North American Power. “Reaching this major achievement of one million dollars in donations means the program is working, and we look forward to seeing its continued growth in the coming years.”

The program focuses on supporting organizations that achieve the greatest good both internationally and locally. This commitment is accomplished by partnering with highly regarded charities like Save the Children, Heifer International, Alex’s Lemonade Stand Foundation, Homes for Our Troops, Action Against Hunger, Little Kids Rock, Keep America Beautiful, Scholarship America, Hope for Haiti, Dress for Success Worldwide, Teach For America, Malaria No More, Americans for the Arts, Room to Read and other non-profit organizations that have a far-reaching and positive impact here at home and all over the world.

“Funding from North American Power’s Missions to Millions program has reached across the globe and across our own country, helping to meet the most pressing needs of children – nourishing frail bodies, educating hungry minds, improving household incomes and healing sad hearts,” said Carolyn Miles, President and CEO of Save the Children.

“North American Power’s innovative Mission to Millions program is about doing well by doing good,” said Marleen New, Senior Director of Global Partnerships and Alliances at Heifer International. “For North American Power, it isn’t enough to be your power company; it’s about using that power for social change and innovation.”

Launched in April of 2011, Mission to Millions puts the power of giving in the hands of the customer by allowing them to direct company funds to the charity partner of their choice. The program structure is simple; when customers switch to North American Power, they select their preferred non-profit organization from a list of featured charities. Every month that customer pays their energy bill; North American Power donates $1 on their behalf to their chosen charity. Through this ground-breaking structure, the company demonstrates the true power of one dollar and has already generated a significant amount of positive change.

For more information on the Mission to Millions program and its charity partners, please visit http://www.napower.com/about-us/m2m.

ABOUT NORTH AMERICAN POWER
Founded in 2009 by energy veterans, Kerry Breitbart and Carey Turnbull, North American Power is one of the nation’s fastest-growing energy suppliers, earning a spot on the Forbes list of America’s Most Promising Companies. Underscored by a commitment to community and sustainability, North American Power is giving Americans the ability to choose sustainable energy at competitive rates with the flip of a switch, plus the opportunity to give back to charity and earn money by referring friends and family. North American Power currently serves over 300,000 customers nationwide. For more information, visit http://www.napower.com.