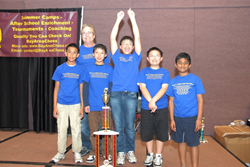 Joe Lonsdale takes a moment to enjoy another National Championship with MSJE students.

Teaching with Joe Lonsdale has been the most educational and rewarding experience of my chess career.”-Chris Torres(President of the Torres Chess and Music Academy)

On Saturday, April 26, while many people are still asleep, elementary school children will turn out in mass to play chess in the largest State Championship chess event on the West Coast. The k-6 section is projected to have more than 500 children and starting this year, Calchess has officially renamed their Elementary State Scholastic Championship the, “Joe Lonsdale Championship.”

Joe Lonsdale established the Mission San Jose Elementary School Chess team in 1990 for the benfit of his oldest son and has been running the program ever since. Mission San Jose Elementary School has made a habit of winning almost every State Championship title in California that they are eligible to play for and Joe’s success as the MSJE head coach is really what put Fremont Chess on the map. In fact, Joe has lead the MSJE chess team to more state championship titles than all the other schools in Northern California combined. So it is fitting that, this year, to honor Joe’s unparalleled success as a scholastic chess coach, Calchess has decided to rename the Calchess Elementary Scholastic State Championship after Joe Lonsdale.

“Joe Lonsdale successful approach to teaching chess produced the first elementary school team in the history of California to win the National Championship and the first to ever repeat the feat. Joe’s only critics are those who try and emulate his success but of course lack the chess knowledge and finesse that Joe brings to every chess class. Sadly, instead of learning from the master himself, some people would rather spend their time creating discord in the Norcal scholastic chess scene. I, however, am honored to work with and learn from Joe Lonsdale on a weekly basis. Teaching with Joe Lonsdale has been the most educational and rewarding experience of my chess career.”-Chris Torres(President of the Torres Chess and Music Academy)