Ticket Down announces that Paul McCartney will headline at the Philips Arena in Atlanta, Georgia; this popular secondary ticket exchange is offering the customer appreciation promo/coupon code PAUL-MCCARTNEY-2014 for added savings. Presale tickets for the McCartney concert in Minneapolis are currently available with sales to the general public beginning on Friday, April 25th. 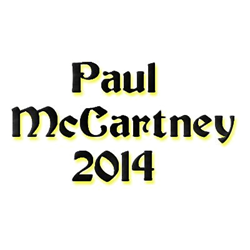 Ticket Down is a dependable source for affordable Paul McCartney tickets in Atlanta at the Philips Arena. In Atlanta, Ga., the entertainment never ends. Whether it is cheering on the Atlanta Braves, Atlanta Falcons, and Atlanta Hawks, enjoying a night at a comedy show, or taking in a concert from one of the biggest names in music, there is always something going on. This time around, the city of Atlanta is one of a handful of new cities that have been added to the “Out There” tour featuring the legendary rock and roll performer, Paul McCartney. When McCartney brings his popular live show to the people on June 21, it will be another in a long line of huge events featuring the biggest names in music.

The Philips Arena is the home of the Hawks of the National Basketball Association. The venue has been around since 1999 and has been the home of the Hawks ever since. It is also the home of the Atlanta Dream of the Women’s National Basketball Association and has also been the home to other professional and collegiate teams. When fans head to the venue for concerts, it can usually seat more than 21,000 fans, and they will need every single seat possible for this concert. The venue has long been considered one of the best and most popular in the country as the venue sold more than 550,000 tickets in 2007 and in 2011, was called the third busiest venue in the United States.

McCartney has had a remarkable career that has spanned more than 55 years. During his time as a member of The Beatles and Wings, plus as a solo performer, McCartney has helped sell more than 100 million records, 100 million singles, and has also taken part in 60 gold discs. Along with former band mate in The Beatles, John Lennon, the duo was considered the greatest writing team of all time. Overall for McCartney, he has written or co-written 32 songs that have reached the top of the Billboard Hot 100 singles charts.

When fans make their way to the venue for this highly anticipated show, they will want to hear many of the songs The Beatles made famous, as well as other popular songs from his time with Wings and as a solo performer. Among those songs include “Maybe I’m Amazed,” “Silly Love Songs,” “Jet,” “Help!,” “We Can Work it Out,” “Yellow Submarine,” and “Band on the Run.”

Ticket Down delivers tickets to sold out concerts and events worldwide when no one else can, and they do so at discounted prices. This popular ticket exchange also has discounted Paul McCartney tickets at the Philips Arena in Atlanta. Add promo/coupon code PAUL-MCCARTNEY-2014 for added savings on any ticket order.

Check out our discount codes online for all upcoming events. Ticket Down has low overheads, which allow this well-known ticket site to keep prices competitive.