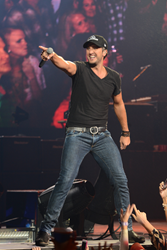 Superstar Luke Bryan has quickly become one of Nashville's most sought after entertainers. His "That's My Kind of Night Tour" is currently playing across the US and Canada, selling out all concerts to date. His previous tour performed for 1.3 million fans in 2013 and it was clear after performing for a sold-out crowd at Summerfest 2013, Milwaukee loves Luke Bryan. The two-time ACM co-host, who received the 2013 ACM Entertainer of The Year honor, recently celebrated the No. 1 debut of his digital EP Spring Break 6...Like We Ain't Ever. Combined, Luke's six Spring Break series releases have sold over 825,000 copies.

Since the debut of his first album in 2007, Luke has sold nearly 6.2 million albums, 23.1 million digital tracks from his four studio albums and placed 9 singles at No. 1. Luke's current single "Play It Again" is from his Platinum selling Crash My Party album, which sold one million copies in just six weeks and was the best-selling country album in 2013. The album contains three No. 1 hits thus far including "That's My Kind of Night," "Crash My Party" and "Drink A Beer."

Seventeen-year-old Danielle Bradbery is the youngest winner ever of NBC’s The Voice. She charmed her way into the national spotlight with a mix of country hits from several decades and her coach on The Voice, Blake Shelton, called her “the most important artist to ever walk across The Voice stage.”

Tickets go on sale Saturday, May 3 at 11:00 am CST and include Summerfest admission. Tickets can be purchased at the Summerfest Box Office, Ticketmaster Ticket Centers, Walmart stores, online at Ticketmaster.com and by phone at 1.800.745.3000 (live Ticketmaster Agent) or 1.866.448.7849 (“Ticketmaster Express” automated phone line). Patrons may also utilize “ticketfast” at Ticketmaster.com to print barcoded concert tickets from home. Convenience fees may be added to all purchases.