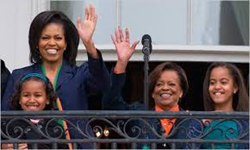 First grandmother Marian Shields Robinson, mother of Michelle Obama, lives with her family at the White House. Her flower is Iris meaning inspiration.

While our poll pays special tribute to these women in the spotlight, we know many grandmothers share these qualities.

California Flower Mall petallers Grandmother poll picks Mother’s Day flower favorites,and a flower meaning unique to each celebrity grandma's style. These and other bargain blooms for grandmothers, moms, mother-in-laws, moms to be, wives and sweeties are available 24/7 Friday May 9 through Sunday May 11.

“While our poll pays special tribute to these women in the spotlight, we know many grandmothers share these qualities,” says Jose Macias, Sr., owner of Macias Wholesale Flowers.

The California Flower Mall, located at 825 San Pedro Street, is one of the largest premier DIY flower marts in the Downtown LA. The eight block Los Angeles Flower District community is the largest concentration of wholesale flower markets and floral businesses in the U.S. It is located in the LA Fashion District Business Improvement District.

Whoopi Goldberg was a mother at 18 and a grandmother at 34.

Gloria Estefan and her grandson

Kris Jenner and the Kardashian girls.

Priscilla Presley has 3 grand daughters and a grandson.