How to Successfully Evangelize in Modern Society

Jason Robért's new book teaches how to successfully become a fisher of men. 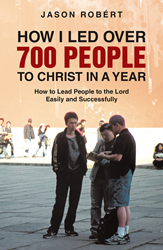 The fastest way to grow as an evangelist is to be trained and equipped by other evangelists. The message you should share doesn’t have to be long. The anointing or calling to evangelize is what empowers the message.

Is one-on-one ministry the secret to successful evangelism?

In his new book, “How I Led Over 700 People to Christ in a Year,” author Jason Robért shares his tips for successful ministry. A how-to guide for successful evangelism, the book shares Robért’s three key tips: Audience, Method and Anointing.

Robért, who earned his Bachelor’s degree from M.I.T., spent 2013 traveling the world to spread Christ’s message.

“I felt God put the ‘fire in my bones’ like the prophet Jeremiah and I had to share my experience with other evangelists,” Robért said. “The book not only spells out the verses in the Bible on evangelism but it also gives real-life examples of how they can be carried out.”

Drawing from his own story, as well as the stories of several men and women who found Christ through his ministry, the book outlines his evangelism and gives tools so that others can utilize his approach in their own ministry.

“The fastest way to grow as an evangelist is to be trained and equipped by other evangelists,” Robért said. “The message you should share doesn’t have to be long. The anointing or calling to evangelize is what empowers the message.”

It is Robért’s hope that evangelists around the world use the book to sharpen their skills and become more successful.

About the Author
At the age of 17, Jason Robért published “The Lab Puzzle Book,” a collection of original, higher-learning mathematical challenges for students. His work was distributed to 737 California high schools and praised in numerous educational publications, as well as People Magazine and the Los Angeles Times. After his graduation from M.I.T., Jason began his work to save others. For over a decade, he has evangelized in Israel, Kenya, China, Ireland, England and his home-based in southern California. Currently, he serves as CEO and Director of Salvation United, a nonprofit organization that he founded in 2012.