A new survey conducted by The Alternative Board reveals 56% of family business owners are either unhappy with their succession plan or don’t have one at all -- 62% of owners believe it's unlikely their business will remain family owned by the next generation. 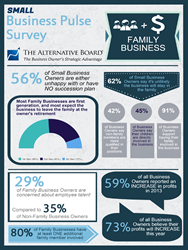 "Succession planning seems like a daunting task to family business owners, but the benefits of having one are undeniable." -Jason Zickerman CEO, The Alternative Board

The majority of owners believe their family-run business won’t remain in the family into the next generation, according to survey results released today by The Alternative Board (TAB). A recent article in Harvard Business Review found that nearly 70% of family owned businesses last just a single generation. As they point out, “the low survival rate has alarming consequences.”

In their survey of small businesses, TAB also revealed that less than a third of owners have a succession plan for their family business. Could this lack of foresight be the reason so many families lose control of their companies as leadership shifts? Business advisors from The Alternative Board delved deeper to find out.

“Entrepreneurs create these businesses because they want to do more than earn money -- they want to build a legacy their children and grandchildren can be proud to continue,” says David Scarola, Vice President of TAB. “So when we discovered exactly how few businesses are succeeding in passing down that legacy, we wanted to find out why.”

Although America is a land of corporate giants, economic success still rests on the backs of families. In fact, between 80% and 90% of American businesses are currently owned and operated by families. Despite these staggering statistics, many families struggle to retain control of their businesses as owners retire and new leaders step up to take the reins. Only about 30% of businesses owned by families will remain that way when their current owners retire, according to the Family Business Alliance. What causes this massive shift and what can families do to prevent it?

“Perhaps the most surprising statistic we uncovered was that 29% of family business owners do not have a succession plan,” says Scarola. “Without one, it’s easy to understand how owners of family businesses can lose the legacy they’ve worked so hard to build.”

Another issue facing family business succession seems to be a lack of training. Although 45% of owners say their children are involved in their business, 62% say it's unlikely their business will remain family owned when they sell or retire. A lack of confidence in leadership abilities could account for this gap. When asked who they would consider most qualified in their respective positions, 42% of family business owners say non-family employees are more qualified. This indicates that although family members may have the technical skills needed to accomplish functional duties, the leadership skills needed to move into leadership positions are lacking.

“Training family members early and thoroughly can go a long way to building confidence,” says Scarola, “even if retirement is years or even decades away.”

Part of the problem could be a lack of planning. Survey results indicate that only 45% of family business owners say their children are directly involved in the business. Although children may be young, pursuing education or running their own companies, business owners who want their families to retain ownership through generations should get children involved in management as early as possible, even if just through job shadowing and mentoring.

Despite the challenges facing family businesses, their owners remain positive. In fact, TAB’s survey found that 59% of owners reported an increase in profits last year and 73% believe their profits will climb this year.

Although the odds may seem stacked against family-owned businesses, these results show a silver lining: that many of the barriers to successful succession are internal and are entirely within the owner’s control. Through mentoring, training and developing a succession plan with the help of a professional, unbiased peer advisory board or business coach, family businesses can remain family businesses for generations.

“Succession planning seems like a daunting task to family business owners, but the benefits of having one are undeniable,” says TAB President & CEO, Jason Zickerman. “TAB peer advisory boards have helped family-owned businesses successfully transfer to the next generation by providing objective advice and feedback from business owners who have already been there, or are currently working on their own succession plans.”

To read a full review of the survey’s findings and learn more about what they mean for your business, visit http://www.TheAlternativeBoard.com. For more information, or to schedule an interview with David Scarola, contact Jason Myers at jason(at)contentfac(dot)com.