Angela Ray of Angela Ray International served as the emcee for the Food Lion Chef Challenge at the Southern Women’s Show in Raleigh, North Carolina. 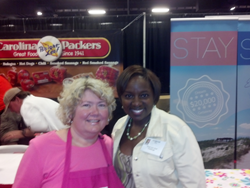 It was like having my own cooking show and hosting a game show all in one.

Angela Ray emceed the Food Lion Chef Challenge at the Southern Women’s Show in Raleigh, North Carolina April 25th -27th. The three day event took place at the North Carolina State Fairgrounds and attracted people from across the state. This is the third time Ray has hosted the chef challenge for the North Carolina based grocery store.

The Food Lion Chef Challenge combined live cooking demonstrations, interactive games and a chopped challenge, where two chefs squared off using food items selected by the show guests along with items from the Food Lion Pantry. The chefs for the four day event included Monica Smith of Gastonia, Michael Bowling of Charlotte, Lisa Franklin of Charlotte and Mitchell Nicks of Greensboro.

Show guests at the Food Lion Chef Challenge learned how to prepare three recipes throughout the weekend and received those recipes along with a coupon to use Food Lion. In addition, during the interactive games, show guests won an array of prizes included fruit infused water bottles and Food Lion gift cards.

Throughout the event, Ray kept the audience energized by facilitating the interactive games, engaging the crowd with giveaways, and hosting each cooking demonstration and chopped challenge.

“I had an absolute blast hosting the Food Lion Chef Challenge,” Ray said. “It was like having my own cooking show and hosting a game show all in one. I have a passion for food, so this gave me a chance to merge my speaking background with that passion.”

In addition to the food stage, guests at the Southern Women’s Show also enjoyed a number of special guests. Patti Stanger, the star and executive producer of Bravo’s hit The Millionaire Matchmaker along with Grammy and Stellar Award nominated Cynthia Jones is the Queen of Neo Soul Gospel made appearances during the weekend. Also appearing on the Food Lion Chef Challenge State were Chef Shawn Pratt, an International private chef for Global Royal Families, High Net worth Couples, A-list celebrities and VIP clients and Lisa Shively, CEO of Kitcheneez.

Sponsors of the show included Food Lion, Chevrolet, The News and Observer, Walgreens, and WRAL. The next women’s show is scheduled for September 11-14 2014 at the Charlotte Convention Center.

Ray’s first job in high school was at Food Lion as a cashier. “I’m happy to have a chance to team up with Food Lion again at this point in my career, Ray said. “It’s like coming full circle."

Angela Ray is an author, actress and award winning speaker. Her film and television credits include Tyler Perry’s Love Thy Neighbor, One Tree Hill, Dawson’s Creek and Louis, where she played the role of Louis Armstrong’s Mother. She is the author of the books, Rays of Motivation, Rehearsing for the Leading Role: Lessons I Learned as an Actress That Can Help You Become a Megastar Student Leader and Blackberry Whispers.

About Food Lion
Food Lion, based in Salisbury, N.C., is a company of Delhaize America, the U.S. division of Brussels-based Delhaize Group and operates more than 1,100 supermarkets. The company employs approximately 57,000 associates delivering quality products, low prices and service to customers in 10 Southeastern and Mid-Atlantic states.