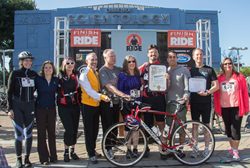 While still in the hospital, Damian determined to turn his experience into a force for good. He has since become a voice for hit-and-run victims in greater Los Angeles. His decision to get back on his bike has inspired a movement

Damian, a victim of hit-and-run crime, created Finish the Ride to make the streets safe for Los Angeles cyclists and pedestrians.

On February 17, 2013, Damian, a Scientology minister, and his wife Grace, got on their bikes at the Church of Scientology in Los Angeles for what they expected to be a routine, fun and uneventful Sunday morning ride. They planned to ride to the store for groceries and stop for a picnic at Griffith Park on their way home.

But as they approached the park, the driver of a minivan pulled out into traffic, struck Damian and tore off down the street and onto the I-5 with Damian pinned underneath his car.

If the driver had stopped, Damian would probably have suffered a minor injury at most. Instead, he lost a leg and nearly lost his life.

Thanks to Rose Rubin, a motorist who followed the vehicle onto the freeway to try to identify it or stop the driver, Damian is alive today. She had no idea Damian was trapped under the chassis. And when Damian managed to dislodge himself and she saw his bleeding body fall to the pavement, she slammed on her brakes, making her car a barrier to prevent traffic from driving over him.

With 20 broken bones, road burns over 70 percent of his body, his left leg mangled and his leg amputated, it is truly a miracle that Damian survived.

While still in the hospital, Damian determined to turn his experience into a force for good. He has since become a voice for hit-and-run victims in greater Los Angeles. His decision to get back on his bike has inspired a movement, culminating in the April 27 Finish the Ride bicycle ride that literally finished the ride Damian and his wife were on when he was struck in February 2013.

Damian believes there are important actions we need to take to make the streets of L.A. safer. “It’s going to take tougher legislation, police enforcement of the laws, and cyclists and pedestrians becoming more safety-conscious,” he says. “But hit-and-run crime is really a symptom of a greater decay of values in society. Fact is, the laws haven’t particularly changed in the past 20 years—the values have. So while the immediate actions need to be taken to prevent loss of life, the actual solution has to include the re-instilling of values.”

For just that purpose, Damian had a special edition of The Way to Happiness booklet printed with the Finish the Ride logo on the cover and made this available to those who participated in the ride. The Way to Happiness is a nonreligious common sense moral code authored by Scientology Founder L. Ron Hubbard.

Damian credits a precept from The Way to Happiness as a critical factor in his recovery.

“I applied a precept that states, ‘Sometimes others seek to crush one down, to make nothing out of one’s hopes and dreams, one’s future and oneself…. The real handling of such a situation and such people, the real way to defeat them is to flourish and prosper.’”

And that is exactly what Damian is doing.

Damian Kevitt crosses the finish line at the Autry Museum in Griffith Park Sunday April 27, 2014, completing the ride he began in February 2013—a ride that nearly took his life.

More than 700 bicyclists gathered at the Church of Scientology of Los Angeles April 27, 2014, to promote awareness of hit-and-run crime through Finish the Ride.

Bicyclists ride by spot where Damian Kevitt was hit in 2013. They finished the ride Damian began that day to raise funds for L.A. County Bicycle Coalition and the Challenged Athletes Foundation.

More than 700 bicyclists joined Damian Kevitt April 27, 2014, to finish the ride he began in February 2013—a ride that nearly took his life. Damian created Finish the Ride to promote awareness.